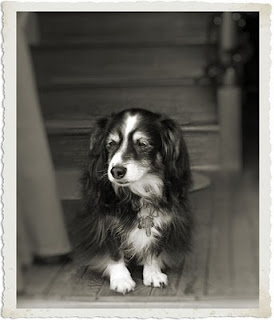 I adopted Tucker from The Foundation For the Care of Indigent Animals in San Diego on October 23, 1993. I had fostered many dogs for Penny at my store, but there was something about Tucker that made him stand out in my heart more than the others. For example, one day I had him outside for a walk when I had to run back into the store to answer the phone. He got all excited running in with ears flying and tail flagged. While I was on the phone I watched him as he sat quietly with the most loving expression on his face. The way he looked at me, all adoringly...well, I had to have him! Of course, I already had Sydney, my Australian Shepherd, and then there was the horse, the rabbit, the two cats, two birds, two guinea pigs, and 3 aquariums! I certainly didn't need another animal. I thought it would be nice for Sydney to have a canine companion when I wasn't home. After doing some minor renovations to the house, and having the adoption approved, Tucker came home from work with me. I had my sister, Margaret, bring Sydney outside to a neutral area where they could be introduced. After the initial grumbling, growling, and raised hackles they started to get playful with each other. When we saw that we knew they would get along fine.

He may have seemed like a small dog but that's because of the Corgi length, or rather the shortness, of his legs. Besides the Welsh Corgi he probably had Springer Spaniel in him and maybe some Longhair Dachshund. Hard to tell with these wonderfully unique "Special Blend" doggies. People used to ask me if he was Sydney's baby. She was a black-tri too, but, no they simply complimented each other well in every way.

When I moved across the country in 1997, Sydney and Tucker rode in the cab of the U-Haul Truck. Sydney was on the seat between my friend, Sally, and me. Tuck was on the floor on the passenger side. They were so good the whole trip. They thought it was neat to be getting constant petting and going for walks in new places. They enjoyed the night in the hotel too! Probably because it wasn't moving!

One of the reasons I was approved to adopt Tucker was that I didn't have children. He was very aggressive toward young boys and not all that nice with girls either. At the time I adopted him I certainly wasn't planning on having a child so I foresaw no trouble in that area. In 1997 when I found out that I was going to have a baby, my husband and I were VERY concerned that Tuck would have to go back to Penny in San Diego. I read about what to do to acclimate dogs to having a baby in "their" home and went to work getting Tucker and Sydney prepared. When we brought our daughter home at 2 days of age, the doggies were very curious and totally accepting of the new addition to the family.

On September 30, 2000 Sydney had to be euthanized. She had almost made it to 14 years of age, but our beloved companions never live long enough. I took Tucker with us to the vet so that he could say goodbye, and have some idea that she was gone. I kept him with me continually, and he handled her absence fairly well. However, he did not tolerate being left alone like he had before Sydney left us. We ended up taking him with us whenever possible but sometimes he just had to stay home.

He not only tolerated my daughter, but appeared to feel great concern for her as well. He was very trusting of her and showed his vulnerability without hesitation. He was the best "upside down" dog I'd ever been around and would often lie on his back for her to pet him. Most of his serious sleeping was done on his back with his legs shamelessly splayed. He had a wonderful Bowser Donut Bed, which he loved but when he got too warm he headed for the hardwood floor.

As he got older he had cloudy lenses, a gray muzzle, and an occasional pain that caused him to limp. But, even at 17 he still got really frisky at times. He acted like he was going to climb the giant trees after the squirrels. He'd rush out the door with his head and tail up lookin' for trouble. He followed me around so much that I felt guilty for all of things that kept me going from morning 'til night. At 15 he developed a heart murmur and a cough for which he received medication daily. He didn't seem to get markedly worse until June 7, when he couldn't stop coughing. The cough suppressant didn't work and he was miserable. We had him euthanized on June 9 and his remains cremated the following weekend. We'd been together for almost 15 years. I still cry when I look at his photos and videos. I hope I never forget the feeling I got when my "Little Man" looked at me. I am certain he knew how special he was to me by the way I looked at him.