Cats are such a unique and strong presence in a home. I often think about my cats, who are all gone, as they gave me much joy and affection.

I have spent time with many other cats at animal shelters, by fostering them, and by volunteering with a feral cat group in California.  Not all cats are aloof. Really, they're not.  (Willie was the only one that fit that description.)  The other 6 were attentive, loving, and loyal.  Pretty good percentages if you ask me. 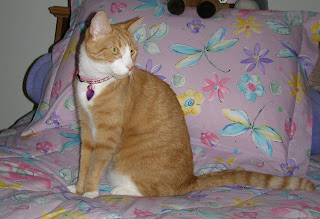 We adopted this handsome orange tabby from a family member in 2004.  He was so timid and frequently hid under the bed.  Thankfully, he left that behavior behind shortly after coming to live with us.  He was quite vocal and was not shy about asking for attention.  He was tall, lean, and pretty active for a senior kitty. He loved being groomed and he rubbed his face on just about anything you held in front of him, particularly books while my daughter was reading them.  He had a cat bed but preferred sleeping on my daughter's bed.  He enjoyed sitting in the windows and he faithfully used his scratching post.  He waited politely every evening for playtime with the laser light toy and he raided the trash can for paper wads to bat around.  Honey was a very cool cat and superb a companion.  We all miss him very much! 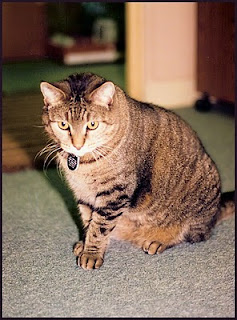 This big guy was one of two feral cats that lived in my father's neighborhood.  My dad thought that Stuff (named Fluff 'n Stuff by the kids in the neighborhood) was a kitten from the female cat.  Dad eventually had "Mama Cat" spayed, and Stuff neutered.  He built them a little house and fed them so they didn't have to raid trashcans to eat.  Mama Cat disappeared but Stuff stayed around my dad's house.  When my dad was leaving the state I took Stuff to my place of employment.  He was so frightened in the beginning, but as time went on he became quite friendly with my employees and me.  He adored being petted, scratched, and groomed.  He adapted to being an indoor cat very well; faithfully using a litter box and his scratching furniture.  He would come downstairs to keep watch over me while I was on the sales floor but would run upstairs if something frightened him.  He was somewhere around 8 years old when he came to stay with me.  He lived for about 10 more years.  For starting life as a feral cat, Stuff sure seemed to appreciate his lifestyle change.  I certainly appreciated the affection he freely gave to me. 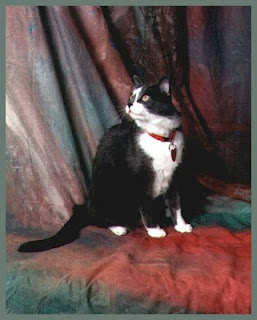 After Topanga died I had to get through my grief period.  After that, I still wanted to have a house cat, so I went to some local shelters in search of one.  In December 1987 my friend, Deborah, and I went to one of the local shelters to spend time with the cats.  After several shy but sweet kitties came to visit us, Willie was brought in.  He was a big guy with a horribly aggressive personality.  The volunteer said he was termed "un-adoptable" because he always scared potential adopters.  Well, silly me, I put in my application, and the wait was on.  In a few days, I was notified that I was approved to adopt him.  On my day off I drove to the shelter to pick him up.  I had brought a plastic kennel, but they insisted that I take him home in a cardboard one.  By the time we arrived home, he had successfully torn his way out!  For the first month he remained in the master bedroom away from the 4 dogs, and all of the small animals.  Every time I tried to pet him he would scream at me and walk away in a tiff.  Once, while I was giving him long strokes down his back he turned around and bit through the skin between my thumb and finger!  I learned then that I had to make him come to me.  As the months went on we worked out a routine.  He had no trouble with the dogs or small animals.  He would follow me around the house while I did chores.  He greeted me each day when I came home from work, and would lead me to his food bowl so that I could watch him eat.  He slept on the bed with me, but always at the foot.  He was wonderful to bathe and groom, but the veterinarian and his staff were scared to death of him!  I always had to go get him out of the crate after they were done taking care of him. He would drink out of the dog bowl only after swiping his paws over the surface of it for a few minutes.  He loved cantaloupe and would eat it to the rind.  He would lie only on the back of the couch when I was seated on it; always above, never beside me.  He was so dominant!  He never purred, and his only vocalizing was a scolding type of meow.  He's been gone for many years, but my memories of him are still vivid. 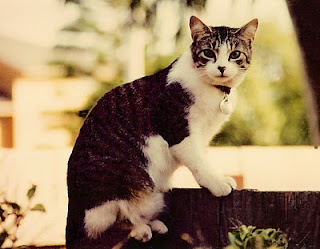 In 1983 a litter of two-week old kittens was dropped off where I worked.  There were 6 of them.  During the day we tried to place them with someone, and at the last moment, a man (who already had 13 cats!) took 5 of them.  I was elected to take the 6th one home to raise.  I named her Bailey.  She took to the Kitten Milk Replacer (KMR) and grew up to be a healthy, beautiful girl.  She was supposed to be more of a foster cat than my personal one, but I ended up keeping her until she was 3 years old.  I placed her with a nice family when I got married because my new husband's dog was horribly aggressive.  One day at work I got a phone call from a woman who had found poor Bailey dead on the side of the road.  She still had her collar and ID tag with my name and contact information.  I called the family and found that they were on vacation.  The person who was taking care of the animals hadn't known she was supposed to remain inside and had let her out.  Another beautiful little girl lost in the dangerous world outside. 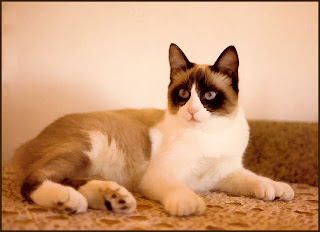 This stunning girl belonged to one of my grandmother's friends.  Tuyen's father was Tonkinese, and her mother was a black and white Manx.  She had lovely coloring, brilliant blue eyes, no tail (called a Rumpy Manx), and was a polydactyly (extra toes on each foot.)  To say that Tuyen wasn't quite right, intelligence-wise, is an understatement.  She was sweet but had no clue how to adjust to situations.  She rarely seemed to learn from life.  A favorite veterinarian suggested that Tuyen had schizophrenic tendencies.  I tried to keep her safe from herself, and from the world, but barking dogs so horribly frightened her one night that she escaped out-of-doors, and was hit by a car.  After a frightfully long drive to the emergency hospital at midnight, they told me she could not survive her injuries.  The poor sweet girl was only 3 years old. 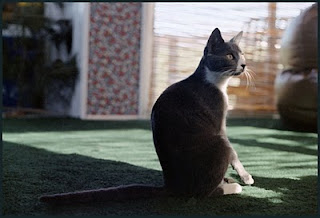 If there was ever a cat born especially for me, Topanga was it.  She lived at a barn, where I worked the horses.  I ended up taking her mother to get spayed and bringing this little gray furball home with me.  She had a little monkey face and more personality than I had ever seen in a cat.  She loved me as much as I loved her, and she showed it at every opportunity.  She moved with me several times but never seemed to be overly stressed by being uprooted.  She was clean, affectionate beyond description, had excellent manners, and was my feline soul mate.  She always greeted me immediately upon my arriving home.  She would jump up on the coffee table, wrap her front legs around whatever part of me she could reach, and rub me affectionately with her chin, often drooling just a bit.  She would always be in my lap as soon as it was a lap, "doing toes", as I called her kneading.  She would do toes on my legs, turn around, put her front legs on my shoulders, and give me kisses on my chin.  One of her favorite things was to curl up in my clothes or bath towel when I was done with them.  My roommate and I thought Topanga looked like The Pink Panther character.  We would hum the music when she was about, and it surely fit her personality.  For months after she suddenly died from an aneurysm, my mind would picture her running around the corner to greet me.  How lucky I was to have had her in my life! 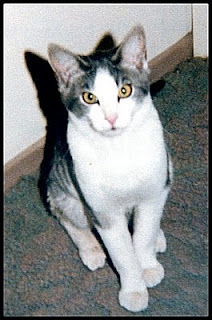 When I was 16 a Siamese cat got in our car, came home with us, got out of our car, and roamed the neighborhood...all without us realizing it!  I noticed her one day, asked the neighbors if she belonged to anyone they knew.  All answered no!  A short time later, "Samantha" was living with us and delivered 5 kittens.  Kristofer David was one of them.  We were finally connected with Samantha's owner, but he didn't want her since she had had kittens.  We kept her, had her spayed, and she lived with my grandfather for many years.  Kristofer was never very playful, even as a kitten.  Mostly he was into rolling over and over and watching the birds through the windows.  He would sleep on the bed with me, mostly keeping to himself.  However, when he wanted out of the bedroom in the morning I had better get up and let him out.  One morning after I continued to ignore his "polite requests" he jumped up on my chest, stared me in the face, and let out with a howl like I'd never heard before.  After that, I responded in a timely manner.  I didn't want to push my sweet boy to that extreme ever again!

Posted by Virginia Hill at 7:52 AM