Welcome to the Elemental Mysteries, where history and the paranormal collide, and where no secret stays hidden forever. Join five hundred year old rare book dealer, Giovanni Vecchio, and librarian, Beatrice De Novo, as they travel the world in search of the mystery that brought them together, the same mystery that could tear everything they love apart. 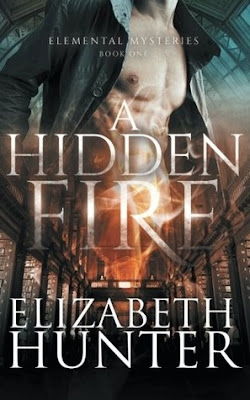 A phone call from an old friend sets Dr. Giovanni Vecchio back on the path of a mystery he'd abandoned years before. He never expected a young librarian could hold the key to the search, nor could he have expected the danger she would attract. Now he and Beatrice De Novo will follow a twisted maze that leads from the archives of a university library, through the fires of Renaissance Florence, and toward a confrontation they never could have predicted.

A Hidden Fire is a paranormal mystery/romance for adult readers. It is the first book in the Elemental Mysteries Series. 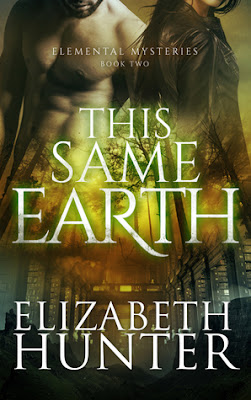 Beatrice De Novo thought she had left the supernatural world behind…for the most part. But when the past becomes the present, will she leave her quiet life in Los Angeles to follow a mystery she thought had abandoned her? Where has Giovanni Vecchio been, and why has he returned? Giovanni has his own questions, and he’s looking to her for answers.

The sequel to A Hidden Fire will reunite Beatrice and Giovanni to continue their search through the past while both wrestle with the future. When the world as you knew it has changed forever, is there any way you can turn back?

This Same Earth is the second book in the Elemental Mysteries series. It is a paranormal romance/mystery for adult readers. 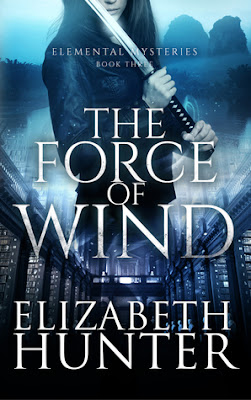 How far would you go to protect the ones you love?

What would you sacrifice to kill the one you hate?

Join Giovanni Vecchio and Beatrice De Novo as they travel to a hidden island on the far edge of China and seek the help of an ancient immortal court. Can they weave their way through the tangled web of centuries-old alliances and ruthless feuds to find what they’ve been looking for? Friends will be revealed, enemies will find them, and a dangerous secret will come to light.

The Force of Wind is the third book in the four-part Elemental Mysteries series. It is a paranormal mystery/romance for adult readers. 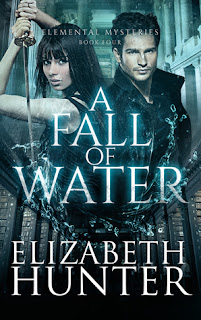 Still grieving from their loss in the far East, Giovanni Vecchio and Beatrice De Novo discover that for them, all roads really do lead to Rome. But nothing is quite as it seems in the Eternal City. Joined by Carwyn and Tenzin, unexpected clashes greet them almost immediately, and rivalries churn beneath the glittering facade of the old Roman court. They quickly realize that allies might be enemies, and ancient rivals could hold the key to a deadly secret.

Giovanni and Beatrice will be forced to call on old alliances, ancient power, and fierce cunning to survive for the eternity they both desire. Sometimes, finding the end means going back to the beginning. Fire, Earth, Wind, and Water finally meet with devastating results in the conclusion of the Elemental Mysteries.

2012 has been a stupendous year in books for me. As the end of the year approached I wondered what book would be the year's last. I was not only thinking of how far I had exceeded my original Reading Challenge quota of 40 books but how I wanted to read the year out with a BANG...or at least a WOW! Well, when I finished the fourth book in the Elemental Mysteries Series this morning I felt I could not have closed my reading year out any better.

In the three days I was reading A Hidden Fire, This Same Earth, The Force of Wind, and A Fall of Water I felt completely engrossed (geographically, culturally, imaginatively, humorously, and romantically) by the characters and story.

I don't consider myself a true fan of fantasy, but I have read several "vampire" books. I will say that the Elemental Mysteries Series is like no others I have read. The intelligence, wit, civility, and the devotion to friends and "family" that the preternatural beings exhibit in the series did not leave me wholly focused on their being vampires. It was not their elemental powers or mystique that drew me to them, but their collective remaining humanity.

In reading these rich, colorful books I experienced many emotions. Elizabeth Hunter wove an epic tale filled with the wonder of daily life, eternal friendships, a centuries-old mystery, and everlasting love. Definitely, a narrative to be wowed by!

Giovanni Vecchio to Beatrice De Novo in A Hidden Fire -


“Far be it from me to keep a woman from her book. That could become dangerous.”

~*~
An exchange between Beatrice and Giovanni in A Hidden Fire -


“So, the wooden stake through the heart thing is apparently a myth, but you can be killed by fire. Anything else?"
"Should I be concerned that one of your first questions is how to kill me?"
Her jaw dropped. "What? No! I didn't mean... I was just curious."
He snorted. "Well you can remain so."
"What about the sun?" she asked. "Extra toasty?"
"I'm not going to burst into flames, but I avoid tanning beds."
"Silver?"
"Some of my favorite cufflinks."
"Garlic?"
"Please," he sneered. "I'm Italian.”

Beatrice De Novo to Giovanni Vecchio in A Hidden Fire -


“Tell the truth, Giovanni Vecchio." A mischievous look came to her eye. "You have a butler, a cool car, and I've only ever seen you at night..."
He froze, tension suddenly evident in the set of his shoulders. Beatrice leaned closer and whispered, "You're Batman, aren't you?”

An exchange between Giovanni and Beatrice in A Fall in Water -


"I have a large house in Rome, an estate outside Florence, and a smaller flat in Milan. Didn't I tell you that?"

"That's all I have in Italy. I have a few other places scattered around Europe."

Beatrice paused. "Was that on your husband profile right under your ability to burn pasta? Because, I'll be honest, anything after the description of your sexual skills I just skipped over."

Posted by Virginia Hill at 1:28 PM No comments:

Book Review: The Edge of Never by J.A. Redmerski 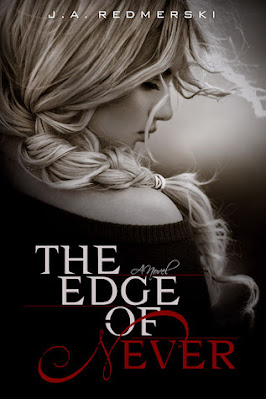 Sometimes life takes you off course . . .

Twenty-year-old Camryn Bennett thought she knew exactly where her life was going. But after a wild night at the hottest club in downtown Raleigh, North Carolina, she shocks everyone-including herself-when she decides to leave the only life she's ever known and set out on her own. Grabbing her purse and her cell phone, Camryn boards a Greyhound bus ready to find herself. Instead, she finds Andrew Parrish.

Sexy and exciting, Andrew lives life like there is no tomorrow. He persuades Camryn to do things she never thought she would and shows her how to give in to her deepest, most forbidden desires. Soon he becomes the center of her daring new life, pulling love and lust and emotion out of her in ways she never imagined possible. But there is more to Andrew than Camryn realizes. Will his secret push them inseparably together-or destroy them forever?

MY THOUGHTS
I finished The Edge of Never minutes ago and while my mind is racing with thoughts about this phenomenal story; physically I'm feeling somewhat oxygen deprived and tingly. I want to say to everyone(?) you should read this novel!!! Experience it, more like. I pretty much avoid spoilers and adding detailed story lines so I'll simply attempt to explain how this book has effected me.

There are so many novels vying for our time. I don't dwell on what I might miss though, and fortunately, The Edge of Never appeared on the 'to-read' shelves of two people I follow on Goodreads. After reading the description and seeing the very favorable ratings and reviews I downloaded the Kindle edition.

This has been my year to discover new authors, particularly self-published authors. There have been no real disappointments; many I am quite glad to have read, and a few, like The Edge of Never, that have left me astonished and silently thanking the authors for sharing their gifts with me. So, thank you Jessica Redmerski!!!

I didn't feel like I was reading about Camryn and Andrew. It felt more like I was along for their journey of discovery—as they searched for their individual and collective destiny. And all those things that could have kept them apart...well, they didn't. They had conversations, asked questions, teased and flirted, and they decided what to do and where to go without making any real plans. On top of all that there were muscle cars and music. Andrew's '69 Camaro, which was MY dream car, and his father's '69 Chevelle. Music played a big part in Andrew and Camryn's lives, as it does mine. I share both Andrew's love of Classic Rock and Camryn's fondness for more contemporary artists. Her feelings about The Civil Wars, especially their song Barton Hollow, very much mirror my own. That song ended up meaning a great deal to Andrew, as well. Commonalities like these made me feel even more connected to the story and to the characters. Camryn and Andrew were so young; many of the things they did weren't responsible, and even dangerous to a degree. However, they won my devotion for their overall decency and commitment to each other.

There were numerous passages that effected me intensely—in varying ways. Laughing so hard I hurt, anticipating, and then perceiving the deep attraction and chemistry between Camryn and Andrew. Having my next breath and all conscious thought taken away when something too horrible to imagine is revealed. Lastly, an erroneous assumption on my part was corrected, so I could finally draw a deep breath of appreciation and adoration for a story well told.


“What compels any of us to do the thing we do when deep down a part of us just wants to break free from it all?”
~ Camryn Bennett
~*~

“Just because one person's problem is less traumatic than another's doesn't mean they're required to hurt less.”
~ Andrew Parrish
~*~

“Coincidence is just the conformist term for fate.”
~ Camryn Bennett
~*~

“You two were meant to be together. It's like some wicked fucking fairytale love story that you just can't make up, y'know?” ~ Natalie to Camryn


Posted by Virginia Hill at 1:36 PM No comments: