Music Meme (Day 19) - A Song From My Favorite Album

Picking the song for this one is a snap.  Choosing my favorite album.  Not so much.  I've heard  myself say that this is my favorite, but I can't really describe what makes it so.  Two* of the ten songs on this 1992 album are, in my humble opinion, two of this artist's best.  I've never come across anyone else singling them out though.  What is it about this particular album that stands out among the 24 studio, live, and compilation albums this genius has done?  I wish I had the words to give it the praise I believe it deserves.  I don't.  I will just name the artist, album, and song.  I played the hell out of the CD in my vehicle.  It survived and was ripped onto my PC in 2005.  From my favorite album, Lucky Town, by my favorite artist, Bruce Springsteen, one of my favorite songs of his, Souls of the Departed. 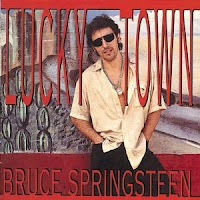 Souls of the Departed
Lyrics by Bruce Springsteen


* BTW, the other song I LOVE from this album is The Big Muddy (lyrics).

Posted by Virginia Hill at 2:08 PM