Book Review: Dead in the Family by Charlaine Harris 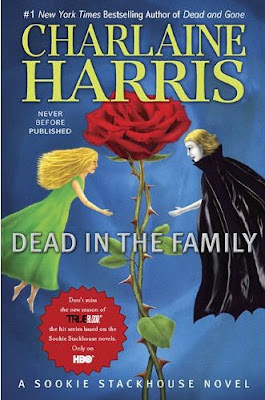 After enduring torture and the loss of loved ones during the brief but deadly Fae War, Sookie Stackhouse is hurt and she's mad. Just about the only bright spot in her life is the love she thinks she feels for vampire Eric Northman. But he's under scrutiny by the new vampire king. And as the political implications of the shifters' coming-out are beginning to be felt, Sookie's connection to one particular Were draws her into the dangerous debate. Also, though the doors to Faery have been closed, there are still some fae on the human side-and one of them is angry at Sookie...very, very angry...

Granted, it's been nearly two years since I read the last Southern Vampire (Sookie Stackhouse) novel. I may have forgotten the general "feel" of the series. I'm still not completely sold on the need for the fairies. I see them as "the last straw." How many different kinds of supernatural beings need to be in one book/series? Does nothing surprise anyone in Bon Temps any more? The unexpected has become...boring. Only once was a character surprised by anything (Pam) and her response was so perfect it elicited a long overdue chuckle from me! The whole story seemed to plod along without much emotion, humor, or passion. Sookie used to be interesting. Her life has become so overrun by these "supes" and yet it seems very mundane. Where's the thrill? Where's the silliness? Where's the chemistry? I'm definitely going to look for those missing elements in the next Sookie book and I really hope to find them in abundance!

Posted by Virginia Hill at 5:22 PM