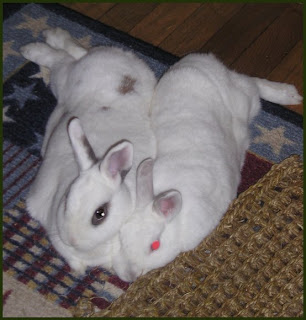 We adopted Lewis and Clark from the House Rabbit Society in May 1998 when they were about two years of age. They were unrelated but each was a Netherland Dwarf mix, which translates to being tiny but mighty. Even though they could be quite timid they also had times when they were fearless. They never craved attention like my other rabbits, but they withstood years of me picking on them; i.e. grooming, trimming nails, and just 'cuz they were so darned cute, holding and petting them.

They lived in carpeted basement bunny bedrooms for several years. The rooms were spacious, cool, and filled with all good things - to bunnies that is. Deluxe housing, excellent food, and lots of toys to climb on, chew, and toss. They mainly ate timothy hay with small quantities of oat and grass hay just for variety. They received a limited quantity of Oxbow Bunny Basic T Pellets, and a healthy serving of organic veggies daily. Neither one ever weighed much more than three pounds the entire time I had them.

They were the best of buddies and rarely got grumpy with each other. Lewis was the braver of the two. Clark was the caretaker, which meant that he groomed Lewis, but Lewis rarely groomed him.

Their huge multi-level condo with attached exercise pens in the basement was their main residence. However, they would stay in an ex-pen in the living room when required - certainly less roomy accommodations, but receiving more attention and treats probably helped make up for that.

Lewis passed away 07 Sep 2007 leaving Clark all by himself. Clark withstood the loss of his BFF much better than I had predicted, but it was so sad seeing him without his buddy. Clark's health started to decline the following spring and he died 26 Jun 2008. I sincerely doubt that I'll have another houserabbit. The reality of it is that rabbits require a lot of special care and can be quite an expense. I'll always have a soft spot for rabbits. Once a bunny lover, always a bunny lover. 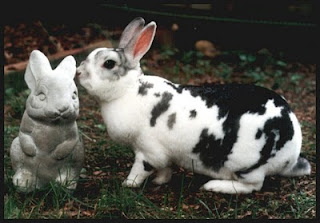 I was told that Haley was born on Valentine's Day, which makes perfect sense, because I felt like I had been struck by Critter Cupid's arrow when I first saw him. He was a Broken Chinchilla Mini Rex and was barely a handful at 8 weeks of age.

I made a spot for him and his custom KW Cage in the living room. He was never a particularly spunky bunny, but he would manage a few binkies now and then. He'd occasionally jump up on the sofa too. The UP part was easy, but the DOWN part was something he never got the hang of. He loved chewing on his willow baskets and flipping his toys about. Things with bells were the most entertaining.

The hormonal naughtiness was avoided by having him neutered at 6 months of age. He got along very well with my dogs, cat, guinea pigs, and birds. In fact, he and my cat, Willie, played a great deal together.

I used to take him on outings to work and to the park on his "H" harness. I even took him to Bunnyfest (San Diego House Rabbit Society's annual event) several times. He was such a good boy on the harness. We both loved people's reactions when they found out he was a rabbit and not a cat!

Haley traveled well during both of my long distance moves. The first time I had him in a kennel on the front passenger seat. The second time, he and Hanna were in the back of my SUV in their individual cages.

He and Hanna never bonded to the point where they could be together, but they liked to hang out with a cage front between them. After Hanna died in 1997 Haley became depressed. I knew the only thing to perk him up would be to have another rabbit in the room with him, so in May 1998 we adopted Lewis and Clark. I rotated free time between Haley and Lewis & Clark. That routine worked out very well for many years.

Haley always came to the door of his penthouse and presented his head for petting. He was my husband's favorite (NOT a bunny guy my husband) and he still speaks of Haley with great affection.

My precious Haley died of cardiac arrest while at the veterinary hospital 01 Aug 2003. Ten and a half years together wasn't nearly enough time to have him in my life. His ashes and adorable spirit will remain with me always. 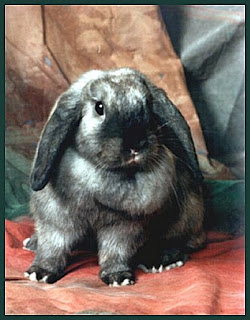 Shortly after becoming manager of the new Petco Store in Poway in 1989, my employees and I were considering what animal we wanted for our store mascot. Most of the stores had cats. We all loved cats but wanted to go another route because we were concerned about the safety and welfare of a cat in a building where the doors would or could be opened continuously. We didn't want to risk a cat escaping outdoors and coming to harm. Somehow or another we decided upon a rabbit. Well, we set out trying to find a rabbit to adopt, and through word of mouth found out about some young ones that would soon be available. My employee, Linda, and I drove to a nearby town and spied the most adorable young Holland Lop. We both thought her too precious for words and promptly brought her back to the store. I named her Hanna, and we kept her upstairs in the office for the first two weeks so she could settle in.

We assembled a double sized hutch on the sales floor close to the checkout area and front doors. We set it up with a litter box, water bottle, crock, hayrack, blanket, and toys and then introduced Hanna to her new, deluxe accommodations. To say that she received a lot of attention is a major understatement. She had people that came to the store strictly to visit with her. (Years later I thought we should have formed a fan club for the little darling.)

The salesfloor was too slick so we would take Hanna upstairs for exercise where we had indoor/outdoor carpet, and she could gain the traction a young bun needed to do some serious playing. Well, when Miss Hanna Nanna was not downstairs to receive visitors, the customers showed their disappointment. Many times I was pleaded with to go upstairs and bring Hanna to visit with her adoring public. I don't think she minded for the most part. She was big into all the fussing that went on. This lasted until she reached puberty and turned into 4 pounds of raging hormones. She would lunge, grunt, and bite most anything that intruded into her territory. We made it through this time in Hanna's life with some physical scars, but were quite thrilled with her wonderful turnaround after she was spayed.

Hanna's Hutch was decorated for all the holidays and special store functions. About 1990 we started doing education and adoption days with the start-up chapter of the House Rabbit Society in San Diego. On those days Hanna had to relinquish part of her domain to visiting rabbits. She was the queen, and was not pleased when her admirers lavished attention on those "other" rabbits. After the events, it took Hanna several days to return to her usual darling self. However, as the years went by, she mellowed a great deal and had very few of those bad Hanna days.

When I left San Diego I got permission from the company to take Hanna with me to Oregon. I had a new KW Cages Metro Cage made for her, and after arriving in Portland in November of 1995, she had to meet my rabbit, Haley, for the first time. After several unsuccessful attempts to introduce them in a neutral area, I gave up and decided to keep them housed separately, and to rotate them for free time. This worked out quite well, and Haley became quite attached to Hanna as long as there was a cage front separating them. He would linger in front of her house frequently. It took a lot of work on my part to get him moving or playing away from Hanna. During this time in Portland, Hanna developed a malignant tumor. I opted to have it surgically removed but knew she would be affected again. My poor sweet Hanna was such a trooper through the whole ordeal.

My doggies were very good with my small animals, and both Hanna and Haley were completely relaxed with them. Hanna was particularly fond of lying down by my dogs, Sydney and Tucker. It always amazed people how well they all got along. What a peaceable kingdom I lived in!

In May of 1997 I packed up and moved to Virginia. The rabbits and doggies made the trip across country very nicely. In the new place the bunnies had their own bedroom in the cool basement. I put indoor/outdoor carpet down and covered the lower part of the wall with tile so the buns would not be tempted to nibble. The room was filled with toys, a tunnel, a cardboard castle, and a chair for their mama to sit on for the longer visits. Things went smoothly for them until Hanna developed more tumors. She was nearing 10 years of age; and after discussing the situation with the vet, I decided to let Hanna come home and live out her days as long as she seemed comfortable. For the last two months she retained a healthy appetite, but had continual problems with gastrointestinal stasis. Each day I had to hold her under the faucet to wash her, and then I would put her in a towel to massage her dry. On January 31, 1998 she wouldn't eat, and her tumors had become very inflamed. That day my husband drove us to the vet where dear Hanna Nanna was euthanized. The veterinarian was so compassionate and gentle--something I was so appreciative of during this sad time. Even though I was going to have a baby in little more than a month, I felt empty. How devastating it is to lose a beloved animal companion. I wasn't the only one who was grieving either; my husband and Haley both did in their ways. Hanna's portrait has continually graced a wall in our home, and her adorable spirit is still within my heart. Hanna had many admirers, but I was blessed with being her lifelong companion, and for that I will always be thankful. 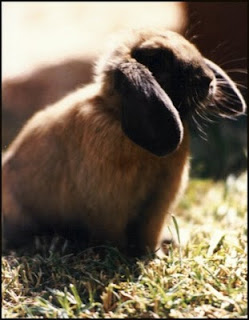 Brenner was a Tort Holland Lop - shy and sweet. He was gorgeous and with those glorious Lop ears, hard to resist. I adored him, but he much preferred spending time with Wembley, his guinea pig buddy. I had them both for nearly 2 years before I gave them to a girl I worked with. They were safe with her, where they would not have been with my new husband's aggressive dog. 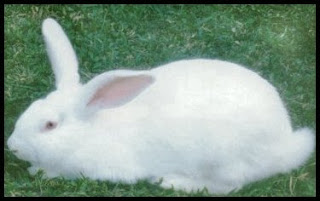 Aloysius, a New Zealand White, was my first rabbit. A cousin in Northern California "unloaded" her on us in 1975, when she was just a few weeks old. She rode home to Southern California in the back of our clean horse trailer. She was supposed to be a he. She was supposed to stay small. She matured to 22 lbs! That's about twice the size of a normal White. She would sit on the sofa next to me and take up two places. The dogs were afraid of her, but she was a sweetheart!

Posted by Virginia Hill at 1:35 PM