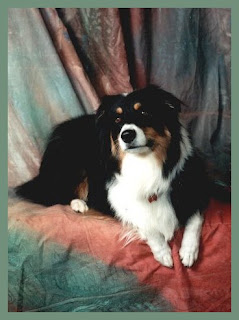 Ginger Lynn's Sydney Marie
19 Nov 1986 - 30 Sep 2000
It was 1986 and I had wanted a female Black-Tri Australian Shepherd for a long time. I was in a situation where I knew I could do well by one, so my friend, Connie, gave me my choice of a Black-Tri female from a litter coming up. She sent me photos of the litter at two weeks of age and that was the first time I laid eyes on Sydney. I told Connie which one I wanted, and then I waited.

My first husband and I had purchased our first home and were packing up to move when it was time to go and get Sydney. Connie had arranged for her to be driven to Los Angeles County and I would need to drive up from San Diego. On Tuesday, January 6, 1987, after a long day at work for both of us, my sister, Margaret, and I got in my husband's truck and headed north to L.A. County. Whoever said it never rains in Southern California wasn't out driving that night because it was pouring so hard it was nearly impossible to see. About midnight we arrived at the home of the retired veterinarian who was keeping Sydney for a few hours after the other folks had dropped her off. He took us around to his beautiful backyard where there was a small kennel on the patio. He said something like, "Watch out ladies" and then opened the door. I had had visions of a sickly, tired puppy crawling out of the kennel but instead here came Syd, like a black-tri tornado! She was 8 1/4 pounds of dynamite and ready to herd. She went after my heels once that evening and after a shake of her scruff and a sharp, "NO!" she never tried to heel a human again.

I was on vacation for the move so Sydney was with me 24 hours a day. I had bought a bunch of toys for her and about a half-dozen Nylabones. I had a Nylabone handy at all times. I had them in my pocket, in her kennel, in my car, in her toy box, etc. There was no way I was letting those razor sharp puppy teeth near me. She housetrained quickly and quit chewing on things that didn't belong to her. She was spayed at 6 months of age. Shortly after that I started allowing her in with the horses. She wasn't aggressive in her herding instincts. She mainly liked to hang out in the pasture with them and keep them in line.

She wasn't typical of Australian Shepherds in one way - she was entirely too friendly and too silly for her own good. She loved everyone and didn't have a stand-offish bone in her entire body. She thought she was so tough when it came to defending her property from dogs wandering by outside the gate. In reality she was a sheep in wolf's clothing. One day a very small Terrier walked past our property and Sydney high-tailed it down the long driveway to tell it a thing or two. She was barking and growling and her hackles were sticking up about a foot. When she got to the end of the driveway the little Terrier started to lunge at her and bark, well, Sydney let out a sharp "yip" and ran as fast as she could back up the driveway. When she reached the relative safety of the garage she stood her ground and the tough act returned. She was 60 pounds of the wiggliest Aussie in the world, but in her mind she was tough enough.

I insisted that all my animals got along with each other. Sydney, being a herding dog, had learned to be gentle with animals smaller than she. One particular night while I was out feeding the horses after work, I heard a lot of scrambling going on in the big "muck bucket" that we used to carry the hay. I shone the flashlight into the tub and about a dozen terrified little mice froze for just a bit before they resumed their struggle to try to get free of the prison they'd fallen into. I set the bucket outside of the hay shed and Sydney came up to inspect. She stuck her head down inside the bucket and the mice continued to do mad leaps to try and get out. She stayed there with her head in the bucket, ears flopped forward with the silliest look on her face. The entire time she made not one attempt to harm them. When I tipped the bucket and they raced away Sydney stayed put and didn't even give chase. That further reinforced what I already knew, that Sydney had the kindest of souls.

When Sydney was nearly 6 years old I adopted Tucker. After the initial few minutes where they huffed and puffed at each other their relationship was outstanding. They were great companions to each other and the best for me. She was much taller than Tuck so she would lie down and wrestle with him, as she did for all the smaller dogs that wanted to play. She was a very thoughtful playmate for the little guys and very protective of all the small animals I had.

The big cross-country move was nothing for either dog. She settled into life in a townhouse with lots of stairs and a tiny backyard. Of course, she was almost 11 years of age and starting to slow down a little. She was always careful with little creatures and when my daughter arrived, she was the same. Careful, gentle, and patient.

Late in 1999 Sydney started having health problems. She was losing her sight and hearing. She lost a toenail and we found that she had a nasty fungus in her paw. The contraindications on the anti-fungal medication prevented me from considering it, especially at her advanced age. Instead she was put on a long-term antibiotic regimen. She took her meds like a champ and ate up the yogurt that I added to her food each day. She did well for several months but in August 2000 her behavior became erratic. On September 30 she didn't want to stand and couldn't seem to make sense of anything. I knew that horrid day had arrived. My "Syddy Wyd" was leaving me. I carried her to the back of my vehicle and brought Tucker with us to the vet. I couldn't stay in the room when she was euthanized but Tucker and I came back in and sat with her afterwards. No amount of Kleenex could have held the tears I shed for my Syd. You just can't let such a special part of your life go without sending her off with a salute. I had Sydney cremated. Her ashes are in an oak box with her name on a brass plate. In 2008 Tucker's ashes joined hers. My sweet Sydney has been gone for many years but her essence remains with me.