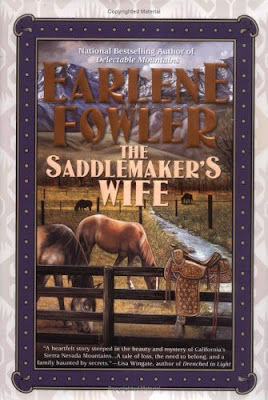 Ruby McGavin has inherited part of a cattle ranch from her late husband, only to discover that his family is very much alive, in contrast to what he told her. Even as she is drawn to handsome saddlemaker Lucas McGavin, she learns more about her late husband's family-and wonders if she ever really knew him.

Piecing together the truth, Ruby uncovers a legacy of pain and denial that has pursued the McGavin family for too long.

Although I am glad that I have finally sought this book out and read it, I found myself comparing the characters to those of Ms. Fowler's Benni Harper Mysteries (of which I've read all), and found them lacking. Give me those colorful and familiar characters every time. As in all of her other books, The Saddlemaker's Wife, features California history—particularly that related to Western influences, ranching, horses, and the cowboy culture. Although you're not exactly left hanging at the end of the story, I would have preferred the story wrap-up more solidly, and possibly feature an epilogue. 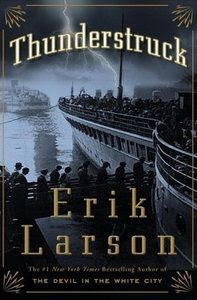 "A true story of love, murder, and the end of the world’s “great hush.”

In Thunderstruck, Erik Larson tells the interwoven stories of two men—Hawley Crippen, a very unlikely murderer, and Guglielmo Marconi, the obsessive creator of a seemingly supernatural means of communication—whose lives intersect during one of the greatest criminal chases of all time.

Set in Edwardian London and on the stormy coasts of Cornwall, Cape Cod, and Nova Scotia, Thunderstruck evokes the dynamism of those years when great shipping companies competed to build the biggest, fastest ocean liners, scientific advances dazzled the public with visions of a world transformed, and the rich outdid one another with ostentatious displays of wealth. Against this background, Marconi races against incredible odds and relentless skepticism to perfect his invention: the wireless, a prime catalyst for the emergence of the world we know today. Meanwhile, Crippen, “the kindest of men,” nearly commits the perfect crime.

With his superb narrative skills, Erik Larson guides these parallel narratives toward a relentlessly suspenseful meeting on the waters of the North Atlantic. Along the way, he tells of a sad and tragic love affair that was described on the front pages of newspapers around the world, a chief inspector who found himself strangely sympathetic to the killer and his lover, and a driven and compelling inventor who transformed the way we communicate. Thunderstruck presents a vibrant portrait of an era of séances, science, and fog, inhabited by inventors, magicians, and Scotland Yard detectives, all presided over by the amiable and fun-loving Edward VII as the world slid inevitably toward the first great war of the twentieth century. Gripping from the first page, and rich with fascinating detail about the time, the people, and the new inventions that connect and divide us, Thunderstruck is splendid narrative history from a master of the form."

The title and cover of this book grabbed my attention at the library. The author could probably make just about any topic engrossing. The research is only as good as the storytelling, and this book is a a story capably told. Marconi and Crippen were as unlike as two men could be, but the author portrays their lives in such a way that I felt empathetic to both. I am quite eager to read The Devil in the White City and Isaac's Storm in short order.

(Note: I read the hardcover edition which accounts for the difference in the publishing date above from the Kindle edition's.) 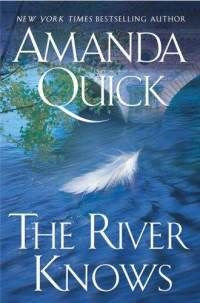 The first kiss occurred in a dimly lit hallway on the upper floor of Elwin Hastings's grand house. Louisa never saw it coming.... Of course, Anthony Stalbridge couldn't possibly have had romantic intentions. The kiss was an act of desperation meant to distract the armed guard from catching the pair in a place they did not belong. After all, Louisa Bryce, in her dull maroon gown and gold-rimmed spectacles, was no man's idea of an alluring female. The only thing the two interlopers have in common is a passionate interest in the private affairs of Mr. Hastings-a prominent member of Society whom they both suspect of hiding terrible secrets. Now, brought together by their ruse, Anthony and Louisa are united in their efforts to find the truth. Each has a reason for the quest. Anthony's fianc?e was said to have thrown herself into the Thames-but Anthony has his own suspicions. Louisa-whose own identity is shrouded in layers of mystery-is convinced that Hastings has a connection to a notorious brothel. When Anthony successfully cracks Hastings's hidden safe-and discovers incriminating evidence-it appears that both their instincts were correct. Yet Hastings is hiding far more than jewels and ledger books. Bringing him to justice will be more perilous than they anticipate-and their partnership will be more heated than either one expects. For it is not only Anthony's curiosity that Louisa arouses, and the two share something else: a thrilling attraction to danger. . . . From the triple-threat author who also hits bestseller lists under the names Jayne Ann Krentz and Jayne Castle, this is a delightful new romp filled with suspense and wit-and the steamy Victorian passion her devoted readers love.

This is the 24th book by Amanda Quick (Jayne Ann Krentz) and subsequently the 24th that I've read. If you like one of her books, you will probably like them all. They all (if memory serves) have a darkly handsome and worldly hero and a slightly irreverent heroine, who are nearly always bespectacled. The chemistry between the two leads is always politely passionate. They get into just enough peril to make for a slightly mysterious plot, and they consistently have surprising (to the heroine) sexual chemistry. The dialogue is ceaselessly clever, catchy, and, yes, polite. In this story Anthony Stalbridge and Louisa Bryce get into just the right amount of danger to make for that fairy tale Quick conclusion. 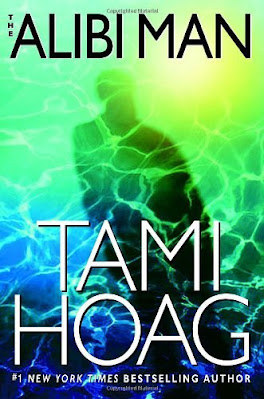 Posted by Virginia Hill at 7:20 AM No comments: