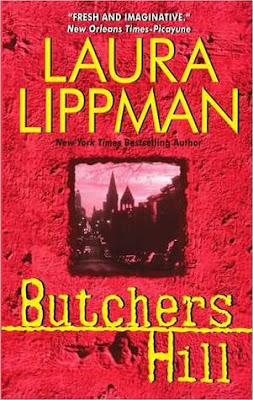 Tess Monaghan has finally made the move and hung out her shingle as a p.i.-for-hire, complete with an office in Butchers Hill. Maybe it's not the best address in Baltimore, but you gotta start somewhere, and Tess's greyhound Esskay has no trouble taking marathon naps anywhere there's a roof. Then in walks Luther Beale, the notorious vigilante who five years ago shot a boy for vandalizing his car. Just out of prison, he says he wants to make reparations to the kids who witnessed his crime, so he needs Tess to find them. But once she starts snooping, the witnesses start dying. Is the "Butcher of Butchers Hill" at it again? Like it or not, Tess is embroiled in a case that encompasses the powers-that-be, a heartless system that has destroyed the lives of children, and a nasty trail of money and lies leading all the way back to Butchers Hill.

Butchers Hill is the third in the Tess Monaghan series but the fourth I've read. I gave up trying to read them in order as it requires too much coordinating with two libraries to do so. I find Tess to be a complex character with simple needs. She seems to believe in doing the right thing but doesn't hesitate to lie to get what she wants—answers and results. She has a newly opened office and two new clients. Neither client was completely forthright with Tess but she perseveres. Both cases made for fascinating reading and the conclusion was completely unexpected.

Through the Trees a River Runs 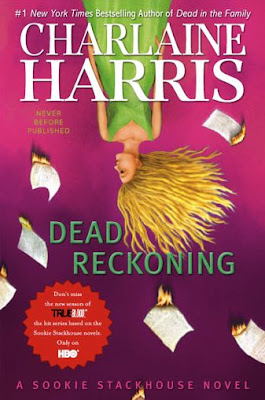 With her knack for being in trouble's way, Sookie witnesses the firebombing of Merlotte's, the bar where she works. Since Sam Merlotte is now known to be two-natured, suspicion falls immediately on the anti-shifters in the area. Sookie suspects otherwise, but her attention is divided when she realizes that her lover, Eric Northman, and his "child" Pam are plotting to kill the vampire who is now their master. Gradually, Sookie is drawn into the plot-which is much more complicated than she knows...

I found this eleventh in the Sookie Stackhouse series to be much more to my liking than the previous book, Dead in the Family. Some of the things that pleased me in the book:

Posted by Virginia Hill at 6:29 AM

A Mountain of Memories

I took this photo of Mt. Shasta 30 years ago. I hadn't seen it in almost that long...

It was the negative I couldn't quite make out on the short strip of four. I asked my husband to scan the three I could identify. I had horses on my mind, you see. I wanted to see the three images of Arabians on that strip. Fortunately, he did this one as well. Seeing this image awakened memories of the reason I had this particular view through the window of my dad's car.

The intimate garden wedding was casual and suited the new couple. The following day we saw Jacqueline and her husband off at the airport. This was the last time my dad, sisters, and I would be together for quite a while. Jacqueline and Dad, well, they're both gone now...


On the way south we stopped at Crater Lake for a short visit. I was always interested in taking photographs of beautiful places and animals at that age. And it was so stunningly beautiful there...

If I remember right my dad and sister took me straight home where we said our good-byes.  I would see them again in a few months. There were three photos to take to finish the roll of film. I don't know if it was a conscious decision to take them of horses at the farm where I worked or just convenient. I am thankful for whatever reason because they were the only ones I have from the year I was there. Some say "It's never too late."  Well, I don't believe it for a minute. Not when it comes to documenting one's memories. One's life. When we're young we think we'll always remember. We say things like, "I'll never forget this moment for as long as I live."  Well, in reality, that is far from accurate. We do forget those "unforgettable" things. Those things that, at the time, were so important.

Back to those three photos of the horses. The first was of one of my co-workers and a young gelding. For the life of me, I can't recall her name or the horse's. The third photo was of a suckling colt. I've tried to remember, with certainty, his sire and dam, but all I have is a guess. The second photo, though. Even looking at the tiny pre-scan image I knew who she was. It took me a little while but I finally remembered her name. Apparently, she is memorable.


I'm determined to try to "fill in the blanks" of my life. Photographs are strong reminders.  I very much regret not taking more. A journal. Why didn't I keep a journal? It was never because I didn't think my life was worth writing about. No, it was because I hated my handwriting. How utterly ridiculous! I often think if we'd had the technology available back then that we have now—personal computers, digital cameras & camcorders, quality printing at home...I could have taken thousands of photos without a thought given to the cost of film and processing. I could have typed my journal entries, like I've been doing for 14 years, without any hypercritical concern about my less-than-perfect penmanship. I could have taken digital videos with a camcorder the size of my hand (highly convenient). Instead, the few home movies my dad took were lost decades ago when the original was always the only.

Those photographs buried under the bed or in the closet? Get them out. Look at them. Scan them. Share them. Those memories you have of an ancestor, or job, or horse, et cetera...write them down, type them up, make an audio recording or a video. Make copies. Share them before they are gone.