I don't know about you but I don't listen to bands I "don't care for."  I hate the word hate.  Too strong.  Especially for something like music.  There are definitely bands whose music I don't want to hear, nevertheless listen to.  My husband and daughter have, since Christmas, been playing Rock Band.  First, it was The Beatles.  Okay, I like The Beatles.  Next it was Rock Band.  Just a few days ago Rock Band 2 arrived.  My husband always plays bass guitar.  My daughter plays guitar, drums, and sings.  She's excellent at all three!  I love knowing she has Rock Band talent, but ooh, some of the songs just make me cringe!  When it's Rock Band time at our home I take off for my study and close the door!  More often than not I launch iTunes and listen to my music.  So there!

Most of the Rock Band songs I've heard that set my teeth on edge are heavy metal.  I'm definitely not a "head banger."  After listening to samples of several of the metal songs on RB2 I chose the most "cringe worthy" as  Colony of Birchmen by Mastodon. 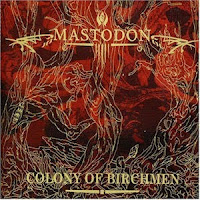 It's nothing personal.  To each their own, as far as music is concerned.  I'm fine with people liking heavy metal, as long as they don't "share" it with me!
Posted by Virginia Hill at 12:40 PM