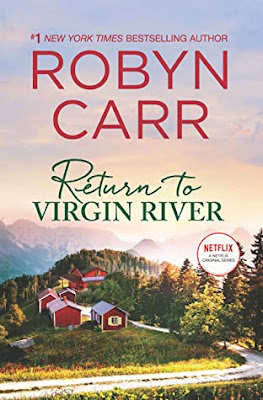 Rating: Four out of five stars

Kaylee Sloan’s home in Southern California is full of wonderful memories of the woman who raised her. But the memories are prolonging her grief over her mother’s recent death. A successful author, Kaylee hoped she could pour herself into her work. Instead she has terrible writer’s block and a looming deadline.

Determined to escape distractions and avoid the holiday season, Kaylee borrows a cabin in Virgin River. She knows the isolation will help her writing, and as she drives north through the mountains and the majestic redwoods, she immediately feels inspired. Until she arrives at a building that has just gone up in flames. Devastated, she heads to Jack’s Bar to plan her next steps. The local watering hole is the heart of the town, and once she crosses the threshold, she’s surprised to be embraced by people who are more than willing to help a friend—or a stranger—in need.

Kaylee’s world is expanding in ways she never dreamed possible. And when she rescues a kitten followed by a dog with a litter of puppies, she finds her heart opening up to the animals who need her. And then there’s the dog trainer who knows exactly how to help her. As the holidays approach, Kaylee’s dread turns to wonder. Because there’s no better place to spend Christmas than Virgin River.

Comfort reads. That’s what the Virgin River books are to me. After reading and listening to ALL of the previous novels and watching the two available seasons of the Netflix series, I know just how I will feel when I return to Virgin River. Spending time getting to know a new couple. Reconnecting with old friends—learning what has happened since last we caught up. This time Landry and Kaylee both learned what they needed and wanted and found with the other. They helped each other move on and heal, opening each to friendship, love, and the ideal future brought about by their willingness to compromise. Kaylee experienced firsthand that dogs bring a joy like no other when given the chance. She stepped up for Mallory with understanding and compassion through a shared grief over the loss of their beloved mothers, and she accepted the man who left her and her mother when he proved he was ready to be her dad. What’s next for Virgin River? I don’t know, but I didn’t get the feeling this was the last time we’ll be getting together. 😊

The house in Virgin River belonged to old friends of her mom’s—Gerald and Bonnie. They’d used it as a summer house for over thirty years. When she mentioned to Bonnie that she thought it would be a good idea to get away, to change the scenery and perhaps escape the constant reminders of her mother’s death, Bonnie offered her the use of the house.

Meredith had been a wonderful constant in Kaylee’s life. It was just the two of them and Kaylee’s childhood had been rich with happiness and perfectly normal. Her mother had been everything to her—her best friend, protector, cheerleader and idol.

The last thing she had any interest in was a man or a romantic encounter. She noticed that Landon spent a lot of time outdoors with his horses and his garden.

In the dark of night when Kaylee and Landry held each other, they whispered about the turn of events. “I never would have seen this coming,” Landry said.

Posted by Virginia Hill at 9:30 AM