Book Review: The Widow of Rose House by Diana Biller 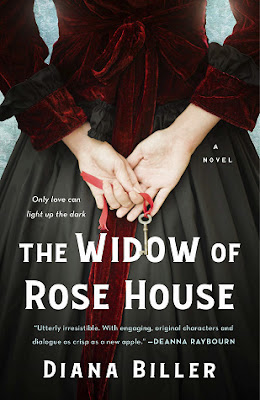 Title: The Widow of Rose House

Rating: Four out of five stars

It’s 1875, and Alva Webster is ready for a fresh start. After three years of being pilloried in the presses for fleeing her abusive husband, his sudden death allows her to return to New York where she is determined to restore a dilapidated Hyde Park mansion, and hopefully her reputation at the same time. She is decidedly not supposed to fall in love.

But when a haunting at her new home threatens her careful plans, she must seek help from the eccentric and brilliant and - much to her dismay - very handsome Professor Samuel Moore. Alva doesn’t need more complications in her life, especially not a convention-flouting, scandal-raising one like Sam. Unfortunately, Sam is the only one who can help. Together, the two delve into the tragic secrets wreathing Alva’s new home while Sam attempts to unlock Alva’s history—and her heart.

Set during the Gilded Age in New York City, The Widow of Rose House is a gorgeously romantic debut by Diana Biller, with an intrepid and resilient American heroine guaranteed to delight readers as she starts over and finds true love.

The Widow of Rose House is a historical paranormal romantic mystery. I enjoyed the setting, bits of intrigue, and touches of the paranormal; but I especially appreciated the protagonists, Alva and Sam. Alva maintained her core strengths after much cruelty and social snubbing. She also repeatedly proved to be a remarkable judge of character. And Sam—Professor Samuel Moore—if there is a more sweet, bumbling, handsome, brilliant, inventor hero out there in the literary world, I want to “meet” him. He is ADORABLE! Although the banter between Alva and Sam shines the brightest, I found all of the dialogue to be clever and Sam’s relationships with his family and best friend to be extremely charming. I enjoy a good ghost mystery and LOVE a gratifying romance. The Widow of Rose house was satisfying in both areas. Particularly so since it is the author’s debut novel.

The house was the basis upon which the whole mad project rested. The plan was to take a house that was on the cusp of being torn down, turn it into a showpiece of modern design ideas, and document the entire process in a book, along with photographs, illustrations, and general design principles that anyone could follow. Even now she could picture the keys to her new house sitting on her desk at the hotel, a certain imagined sheen glowing around them. They were extremely metaphorical keys.

His voice lifted in the universal tone of an older brother exasperated by a younger sister. “My knowledge of the latest fashions now rivals my knowledge of medicine.” “Well, it’s always good to have a fallback career,” Sam said, vaguely looking around for his coat before remembering he was already wearing it. “It’s better than ghost hunting,” Benedict said as they walked out of the room. “I don’t hunt ghosts,” Sam protested. “I bear them no ill will at all. I just want to make their acquaintance.” “Ghost social climber, then.”

“I’ve been in Europe for the last twelve years,” she said. “I read American news while I was there, but it’s not always in the front of my mind. You’re the Samuel Moore. The Moore Conduit. The Moore Rail System. The Moore lantern.” “Actually, I only invented two of the Moore lanterns,” Sam said. “There are four. My parents have one apiece.” “And your parents! I met them! John Moore!” Sam grimaced. “Yes, it’s a shame he’s so much more famous than she is. It’s a travesty, actually—she’s every bit as important, but no one seems to care. Does this mean you’ll let me look at your house?”

The kiss. He’d rushed it—he’d rushed her—and he didn’t know why. Sam was hardly unfamiliar with the fairer sex. He liked women enormously, both as people and as lovers, but mostly, they came to him. They indicated their interest, they set the terms of the engagement, and when the time came for them to part there were no tears and no recriminations.

He pulled the blanket up around her. “And if you’re wondering, right now falls under friendship, support, flirtation, and one category I didn’t mention, which is that you just scared about ten years off my life.”

“You’re nervous about meeting my mother. Because you’re wondering what she’s going to think about us traveling together, and you’re wondering what I’ve told her about you, and because, let’s face it, you’ve fallen for me a bit and there’s some part of you that’s trying her on for mother-in-law status.” “Why, you—” Nervousness fled in the face of outrage. “That’s the most arrogant—Samuel Moore, I swear on my life, I have never met anyone more outrageous than you.” “That’s more like it,” he said, and escorted her up the front steps and through the wide, ornate doors.

There was a silence while Sam stared down at her and tried to understand exactly how much his life had just changed. It was only when she grew tense in his arms that he remembered to speak. “Nonsense,” he said. “I’ll carry you.”