Book Review: Waiting on the Rain by Claudia Connor 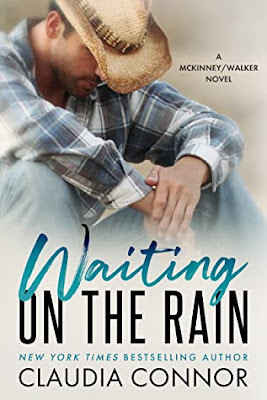 Title: Waiting on the Rain (The Walker Brothers #3)

Being blind doesn’t hold Ava Bennet back in the least. With her work, her shopping, and public transportation within walking distance, she’s totally at home in the big city. But she’s not in the city now. Temporarily back in her small home town to help her father has her struggling in a big way.

Luke Walker is done running from his troubled past. Finally home after years in the military, he’s ready to make amends with his family and set down some roots. But adapting to civilian life is way harder than he ever could’ve expected.

She has no intention of sticking around. He has no plans to run again. All they have is one month together. Will it be enough for Luke to prove he’s everything Ava needs—in light, in darkness, and most importantly, even in the rain?

Waiting on the Rain was a lovely, fluent read with an admirable hero and a courageous heroine. The way they met and the way their romance proceeded had a pleasantly realistic vibe. There were many conversations had (lots of dialogue, YAY!), caring parents, loving but sarcastic sibling relationships, supportive friendships, and the women all had each other's backs. Luke treated Ava with the care, compassion, and respect she deserved. Their romantic relationship took time to build and their sexual chemistry, although very passionate, wasn't described in more pages than they spent actually talking with each other. There were some frightening scenes, which got me all emotional and disturbed, and there was an event looming that added a little bit of angst. However, there wasn't an endless amount of push and pull because the author wrote some really smart characters! I loved the entire book but the way they both compromised to resolve their "issues" was particularly beautifully done!

All these years he’d had his team, but while he’d been gone his family had been making their own connections. Making their own unit. It looked like everyone in this room belonged to someone. He was the odd man out. He drank, looking around, proving his theory. His gaze landed on the blonde again. Raucous laughter erupted from her table, the two couples sitting opposite her looked to be having a great time but she seemed apart somehow. Like him, on the outside. And why the hell was she sitting alone?

He wanted to be glad. He wanted to feel like this was right, that it was where he was supposed to be, but the truth was, he just didn’t know. He couldn’t tell his baby sister that nothing felt right and at least twenty times a day he was sure he’d made a mistake leaving the military.

Luke pulled her hand over farther to hold it in both of his. “I’m touching you now.” “I noticed.” A light breeze kissed her skin and the leaves high above her swayed with it. Her fingers itched to touch Luke’s face, to feel his cheeks against her palms. Did he shave every day or was there some scruff? “But I’m still thinking about it,” he said. “About wanting to kiss you.” He was looking at her now. She knew it, felt his breath on her face. Then Luke took her face in his hands, pulled her in until his lips hovered just over hers. “Scratch that. I need to kiss you.” He cupped her cheek, whispered her name like a question. “Okay.” She’d barely whispered the word before his lips touched hers. Her heart did that fluttery thing again and her mouth opened under his. The air was cool, Luke’s lips were warm, smooth, and firm. There was nothing hesitant about it. It was hot and hard. She gripped his shoulders and held on, not thinking of past hurts.

I’m forty–two and I’ve managed to slip around, avoid and evade any serious sort of relationship with a woman. I figured I always would. You’re making me rethink.”

Posted by Virginia Hill at 2:00 PM