Book Review: Bridgerton: The Duke & I by Julia Quinn 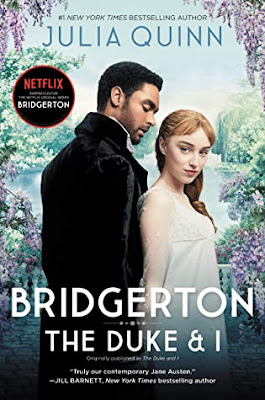 Title: Bridgerton: The Duke & I

Can there be any greater challenge to London's Ambitious Mamas than an unmarried duke?—Lady Whistledown's Society Papers, April 1813

By all accounts, Simon Basset is on the verge of proposing to his best friend's sister—the lovely and almost-on-the-shelf—Daphne Bridgerton. But the two of them know the truth—it's all an elaborate ruse to keep Simon free from marriage-minded society mothers. And as for Daphne, surely she will attract some worthy suitors now that it seems a duke has declared her desirable.

But as Daphne waltzes across ballroom after ballroom with Simon, it's hard to remember that their courtship is a sham. Maybe it's his devilish smile, certainly it's the way his eyes seem to burn every time he looks at her . . . but somehow Daphne is falling for the dashing duke . . . for real! And now she must do the impossible and convince the handsome rogue that their clever little scheme deserves a slight alteration, and that nothing makes quite as much sense as falling in love.

Bridgerton: The Duke & I was a lovely entertaining story. My natural inclination leans toward contemporaries, so historicals must be introduced by attention-grabbing means. Practically the entire Netflix universe found the first season of Bridgerton to be something to talk and write about. What kind of romance reader would I be if I didn't also dive into a televised romance series (or movie) with great anticipation? I binged all eight episodes of Bridgerton on Christmas Day. Then I utilized an ancient gift card to purchase the gorgeous series tie-in edition trade paperback. I am a devoted Kindle reader but just had to have this stunning version in print. I am glad to have watched before reading. I felt the series kept the essence of the story and what details were changed did not deflect from the source. Daphne may be ignorant in some regards, but she is bright, resourceful, and feisty. Simon knows immediately how remarkably different Daphne is and subconsciously allows her to alter his rigid life plans. The repartee between them is OUTSTANDING! Daphne gains critical insights into Simon’s painful childhood but ends up letting her emotions guide her to take advantage of a situation seemingly out of Simon's control. The aftereffects offer the main conflict in the book but this is a romance and that should guarantee at least a happy-for-now ending. In this updated version Julia Quinn adds a second epilogue that proves their besotted coupledom with that much-deserved happily-ever-after! Just a side note: Simon is absolutely adorable when drunk!

“Men are sheep. Where one goes, the rest will soon follow. -Lady Whistledown”

“There were rules among friends, commandments, really, and the most important one was Thou Shalt Not Lust After Thy Friend's Sister.”

“It's the curse of motherhood. You're required to love us even when we vex you.”

“It was those eyes as much as anything that had earned him his reputation as a man to be reckoned with. When he stared at a person, clear and unwavering, men grew uncomfortable. Women positively shivered.”

“He was proud and stubborn, and all the ton looked up to him. Men curried his favor, women flirted like mad. And all the while he'd been terrified every time he'd opened his mouth.”

“Simon gave her a startled look. 'I don't believe I have ever been condescended to by a woman before.' She shrugged. 'It was probably past time.”

“All I meant to say is that a rake's humor has its basis in cruelty. He needs a victim, for he cannot imagine ever laughing at himself. You, your grace, are rather clever with the self-deprecating remark.”

“As she spoke, she turned her face toward his, and in that instant, with the wind catching her hair and painting her cheeks pink, she looked so enchantingly lovely that Simon nearly forgot to breathe.”

Posted by Virginia Hill at 4:00 PM