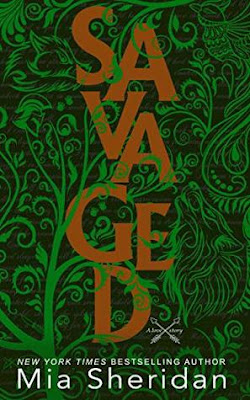 When wilderness guide, Harper Ward, is summoned to the small town sheriff’s office in Helena Springs, Montana, to provide assistance on a case, she is shocked to find that their only suspect in the double murder investigation is a man described as a savage.

But the longer she watches the man known only as Lucas, on the station surveillance camera, the more intrigued she becomes. He certainly looks primitive with his unkempt appearance and animal skin attire, but she also sees intelligence in his eyes, sensitivity in his expression. Who is he? And how is it possible that he’s lived alone in the forest since he was a small child?

As secrets begin to emerge, Harper is thrust into something bigger and more diabolical than she ever could have imagined. And standing right at the center of it all, is Lucas. But is he truly the wild man he appears to be? A cold blooded killer? An innocent victim? Or a perplexing mix of all three?

Harper must find out the answers to these questions because the more time she spends with him, the more she risks losing her heart.

In the acknowledgments section of Savaged the author wrote: "This story had an abundance of moving parts . . . the mystery, the romance, Jak’s language, an unusual setting where every item the characters used had to be considered..." It absolutely did have much to consider and I think Mia Sheridan did a phenomenal job with every part of the story.

Jak's and Harper's backstories were well-defined and emotionally powerful. The ways in which the author unraveled clues, wove those backstories together, and introduced us to the lives of adult Jak and Harper were extremely fulfilling.

The inexplicable connection between Jak and Harper was very transcendental. Their life stories progressed from one of tragedy to enduring to victory to adapting to discovery and finally, to a physical connection both visceral and emotive.

Savaged went well beyond being entertaining. It was absorbing, inspiring, and left me feeling SO happy for Jak and Harper's happily-ever-after!

“Dwayne tells me your father was the sheriff here before him.” For a moment Harper simply stared at him, the question taking her by surprise after she’d just literally been thinking about her dad. She gave herself an internal shake and cleared her throat. “Yes. He . . . he was. For a short time.” Mark Gallagher paused for a beat before nodding. “I’m sorry for your loss.”

The agent stared at him, but his face didn’t say anything. “So, you’ve been living out there how long?” “Fifteen winters.” So many. So much cold. So much hunger. So much loneliness. The agent was looking at him in that funny way. Lucas didn’t know what he was thinking. “Alone? All of them?” “Yes.”

He didn’t know if he could do it anymore, the constant suffering. The winters always coming, the hunger, the loneliness that felt like darkness carved deep into his bones. Why should he fight? For what? Why should he survive? He understood the look in the blond boy’s eyes now. The happiness that it was finally over. Jak should have died on that cliff that night, with the other two boys, maybe three. But he had fought to live. Why? He didn’t want to fight anymore, and there weren’t any pigs nearby.

She smelled like life, like sweet water, like fertile earth, and perfectly ripened berries that would take away the pain of hunger. Her woman scent was the beginning of everything and the place where he wanted to draw his final breath. She was meant for him, he knew that now. No other woman. Only her.

He was a complete dichotomy—wild and sensitive, uneducated and astute, and he fascinated her to no end.