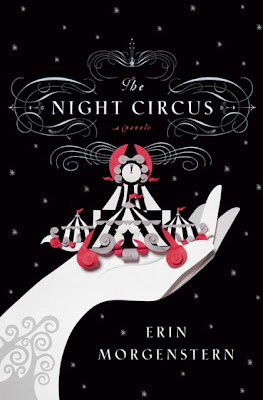 The circus arrives without warning. No announcements precede it. It is simply there, when yesterday it was not. Within the black-and-white striped canvas tents is an utterly unique experience full of breathtaking amazements. It is called Le Cirque des Rêves, and it is only open at night.

But behind the scenes, a fierce competition is underway—a duel between two young magicians, Celia and Marco, who have been trained since childhood expressly for this purpose by their mercurial instructors. Unbeknownst to them, this is a game in which only one can be left standing, and the circus is but the stage for a remarkable battle of imagination and will. Despite themselves, however, Celia and Marco tumble headfirst into love—a deep, magical love that makes the lights flicker and the room grow warm whenever they so much as brush hands.

True love or not, the game must play out, and the fates of everyone involved, from the cast of extraordinary circus per­formers to the patrons, hang in the balance, suspended as precariously as the daring acrobats overhead.

Written in rich, seductive prose, this spell-casting novel is a feast for the senses and the heart.

I have withheld reading any in-depth descriptions or reviews of The Night Circus. I had read bits and pieces of an extended sample, and after noticing a recent review on Goodreads, added it to my 'to-read-or-not-to-read' shelf. If I had read more about the book I doubt I would have read the book. I'm not intrigued by circuses or illusions, at all. The cover art didn't attract my attention. I do like historical fiction though. It was after my daughter sped through it and pronounced it "wonderful" that I knew I would give it a chance.

I don't think The Night Circus would fill the requirements for those seeking a plot-driven book. I thought of it kind of like a magical voice was guiding me along a winding, colorfully illustrated walkway. Everything but that walkway was dark and there were no other sounds but that enchanting narration. Once I got into the rhythm (the alternating timeline of the chapters), and found the magical characters had charmed me, I was hooked. This is a very visual story which could easily have been without a soul. I believe Erin Morgenstern kept the two aspects balanced beautifully!

“A show without an audience is nothing, after all. In the response of the audience, that is where the power of performance lives.” ~ Chandresh Christophe Lefevre

“Better to have a single perfect diamond than a stack of flawed stones.”  ~ Chandresh Christophe Lefevre

“You may tell a tale that takes up residence in someone's soul, becomes their blood and self and purpose. That tale will move them and drive them and who knows that they might do because of it, because of your words. That is your role, your gift.” ~ Mr. Alexander H.

“That's the beauty of it. Have you seen the contraptions these magicians build to accomplish the most mundane feats? They are a bunch of fish covered in feathers trying to convince the public they can fly, I am simply a bird in their midst.” ~ Hector Bowen

“You believe you could not live with the pain. Such pain is not lived with. It is only endured.” ~ Tsukiko

Posted by Virginia Hill at 5:47 AM