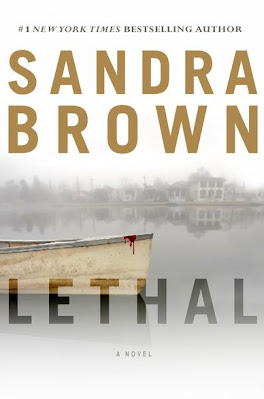 When her four-year-old daughter informs her a sick man is in their yard, Honor Gillette rushes out to help him. But that "sick" man turns out to be Lee Coburn, the man accused of murdering seven people the night before. Dangerous, desperate, and armed, he promises Honor that she and her daughter won't be hurt as long as she does everything he asks. She has no choice but to accept him at his word.

But Honor soon discovers that even those close to her can't be trusted. Coburn claims that her beloved late husband possessed something extremely valuable that places Honor and her daughter in grave danger. Coburn is there to retrieve it -- at any cost. From FBI offices in Washington, D.C., to a rundown shrimp boat in coastal Louisiana, Coburn and Honor run for their lives from the very people sworn to protect them and unravel a web of corruption and depravity that threatens not only them but the fabric of our society.

Lethal is the 53rd book I've read by Sandra Brown. I was so into it I thought I had been reading it for two days. Come to find out, I only started it yesterday afternoon! Talk about an engrossing read!

The one thing I missed with this book was any sign of the Louisiana dialect. Sure, it's stated the story takes place in Louisiana and there are plenty of geographical mentions, but I wanted the characters to read like they're from Louisiana. You know what I mean? Sandra has done it before (Slow Heat in Heaven comes to mind). I wonder why not in this one? (A little hint here and there would have been nice.) There are plenty of twists and turns, and I couldn't settle on what characters could be fully trusted. I felt most of Honor's reactions came across realistically. Emily was adorable! Lee Coburn acted a little like a sociopath for my tastes, but he was amendable with Honor and Emily's influence. I had an inkling who The Bookkeeper might be in chapter 34, but WOW what an exciting reveal!

Oh, the ending...not the tidily wrapped up one we might hope for, but we know what happens, don't we?

Posted by Virginia Hill at 1:05 PM