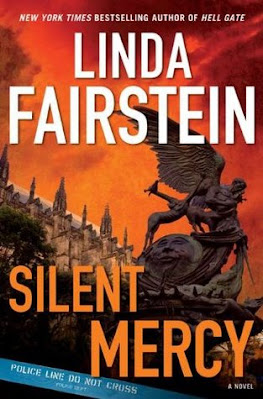 Prosecutor Alexandra Cooper has been called to a Harlem Baptist Church, where a woman has been decapitated and set on fire on the church steps—with the imprint of a Star of David necklace seared into her flesh. Then a second body is found at a cathedral in Little Italy. Alex is blind to the sick and inconceivable motives feeding a particularly vicious serial killer—until she mines the depths of the city’s vast and serpentine religious history.

What Alex follows is a dangerous path that takes her far beyond the scope of her investigation, and directly into the path of a frightening and inescapable truth.

Silent Mercy is my 10th Alexandra Cooper Mystery and just like with the others I found the historical parts quite interesting. The story moves along at a good pace. The team of Alex, Mike, and Mercer is a strong one. They get the job done! The search and capture of the "clergy killer" was uniquely riveting. My main complaint with this series is how discourteous Mike is to Alex. He belittles her to just about everyone and she just takes it in stride. I'd really like to see that stop!

Posted by Virginia Hill at 3:08 PM