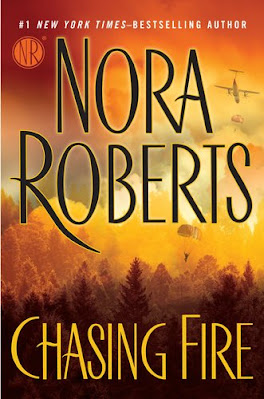 The #1 New York Times bestselling author delves into the world of elite firefighters who thrive on danger and adrenaline—men and women who wouldn’t know how to live life if it wasn’t on the edge.

Little else in life is as dangerous as fire jumping. But there’s also little else as thrilling—at least to Rowan Tripp. Being a Missoula smoke jumper is in Rowan’s blood: her father is a legend in the field. At this point, returning to the wilds of Montana for the season feels like coming home—even with reminders of the partner she lost last season still lingering in the air.

One of the best of this year’s rookie crop, Gulliver Curry is a walking contradiction, a hotshot firefighter with a big vocabulary and a winter job at a kids’ arcade. And though Rowan, as a rule, doesn’t hook up with other smoke jumpers, Gull is convinced he can change her mind…

But everything is thrown off balance, when a dark presence lashes out against Rowan, looking to blame someone for last year’s tragedy. Rowan knows she can’t complicate things with Gull—any distractions in the air or on the ground could be lethal. But if she doesn’t find someone she can lean on when the heat gets intense, her life may go down in flames.

Right from the beginning, I was engulfed (sorry for the puns) by this book. Initially, I felt a little lost in the all-consuming world of the smoke jumpers—I'm still not sure about some of the abbreviations and lingo used in the book. However, the fires are not the reason to read this book, the people are. The tight-knit group whose very lives depend on each other. The deep and trusting friendships are in direct correlation to the dangerous job these people live. It's all or nothing with the lot of them. That means an extremely passionate read on several levels. The amazing character interaction and dialogue, which is Nora's specialty in my book, is intensified by the inherent danger signaled by the siren. I found Rowan a little too tough before "seeing" her in action. She's knowledgeable and highly respected among her peers. Gulliver is her perfect match in every way. Together the sparks fly and just maybe, Gull has replaced Tucker Longstreet (Carnal Innocence) as my favorite of Nora's heroes. I had a feeling who was stirring up trouble and why. Nora ably kept me wondering about that feeling until the end before finishing it so well! (The perfect ending other than not knowing what happened to a secondary character whose life was hanging in the balance!)

Posted by Virginia Hill at 6:53 AM