Book Review: Secrets to the Grave by Tami Hoag 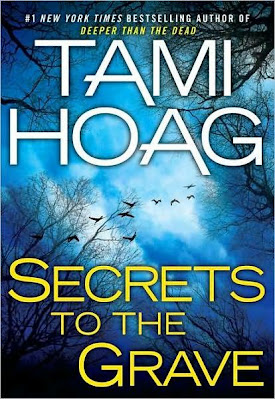 #1 New York Times bestselling author Tami Hoag returns with her second thriller in the Deeper than the Dead microseries, exploring the early days of forensic investigation, the characteristics of innocence-and the nature of evil.

Marissa Fordham had a past full of secrets, a present full of lies. Everyone knew of her, but no one knew her.

When Marissa is found brutally murdered, with her young daughter, Haley, resting her head on her mother's bloody breast, she sends the idyllic California town of Oak Knoll into a tailspin. Already on edge with the upcoming trial of the See-No-Evil killer, residents are shocked by reports of the crime scene, which might not have been discovered for days had it not been for a chilling 911 call: a small child's voice saying, "My daddy hurt my mommy."

Sheriff's detective Tony Mendez faces a puzzle with nothing but pieces that won't fit. To assist with his witness, Haley, he calls teacher-turned-child advocate Anne Leone. Anne's life is hectic enough-she's a newlywed and a part-time student in child psychology, and she's the star witness in the See-No-Evil trial. But one look at Haley, alone and terrified, and Anne's heart is stolen.

As Tony and Anne begin to peel back the layers of Marissa Fordham's life, they find a clue fragment here, another there. And just when it seems Marissa has taken her secrets to the grave, they uncover a fact that puts Anne and Haley directly in the sights of a killer: Marissa Fordham never existed.

I've been a fan of Tami Hoag's since the early '90s. I think this sequel to Deeper Than the Dead surpassed the previous book in several areas. The first chapter was as compelling a book beginning as I can recall. Ever. I was intrigued by all of the characters and relationships but especially those who interacted most with Vince—Anne and Tony. In this book, as in the first, I felt the most frightening character to be Dennis Farman, the 12-year-old sociopath. It was extremely disturbing being in his company! Although I found myself frustrated by the evidence evaluation available to the investigators at the time, I was captivated by the "old fashioned" police work that led to the capture of the murderer. The ending, although not as fascinating as the beginning, was very satisfying.

Posted by Virginia Hill at 9:32 AM