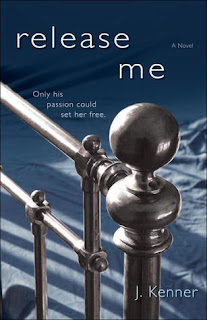 Damien Stark could have his way with any woman. He was sexy, confident, and commanding: Anything he wanted, he got. And what he wanted was me.

Our attraction was unmistakable, almost beyond control, but as much as I ached to be his, I feared the pressures of his demands. Submitting to Damien meant I had to bare the darkest truth about my past—and risk breaking us apart.

But Damien was haunted, too. And as our passion came to obsess us both, his secrets threatened to destroy him—and us—forever.


MY THOUGHTS
Wow, did I ever devour this book! What a tantalizing story! It was my first time reading this author, so I had no idea what to expect. I loved the structure, flow, pacing, word usage, and almost all of the dialogue. I liked how seemingly mundane things were elaborated on: explanations about the nightlight, DVR, camera, etc. There were so many passages I thought were skillfully penned. (Evidenced in the number of highlighted areas!) I liked how Nikki's secret was revealed—timing was everything! I loved the exchanges between Nikki and Damien—all of their exchanges! The way their sexual chemistry was depicted was so...libidinous, read, 'HAWT'! The character of Damien has secrets and skeletons in his closet—it's alluded to several times, but even though he may be ruthless in many areas he openly demonstrates to Nikki his affinity for her. Yeah, he's another outrageously sexy, 'effed' up billionaire, but he shows concern and tenderness along with his predominant ways. And, OMG, he's really good at surprises! It appears the next book in the trilogy, Claim Me, isn't due to be published until July [UPDATE: release date was moved up to April 23!]. Then the final book, Complete Me, won't be released until December [UPDATE: release date was moved up to July 30!]. I almost wish I hadn't discovered Rescue Me until I could read all three back-to-back. Then read them again, more than likely. I'll just have to make do with re-reading Release Me like everyone else. ;)


“He is Jason and Hercules and Perseus---a figure so strong and beautiful and heroic that the blood of the gods must flow through him, because how else could a being so fine exist in this world?”  ~ Nikki Fairchild
~*~

"After all, I'm still new in town. Los Angeles and I are still in the honeymoon phase."
~ Nikki Fairchild
~*~

"I've felt so lost and helpless that I hurt myself in order to feel real, but I never crossed that line into desiring death. On the contrary, I was trying to find that pulse of life inside me."
~ Nikki Fairchild
~*~

"Because now that I have you. I can't stand the thought of ever losing you." ~ Damien Stark
~*~

"Everyone breaks a little sometimes. That doesn't make you weak. It makes you wounded. And I will always be there to help you heal."
~ Damien Stark

Posted by Virginia Hill at 2:58 PM