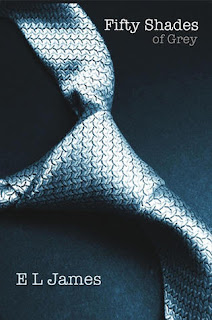 "When literature student Anastasia Steele goes to interview young entrepreneur Christian Grey, she encounters a man who is beautiful, brilliant, and intimidating. The unworldly, innocent Ana is startled to realize she wants this man and, despite his enigmatic reserve, finds she is desperate to get close to him. Unable to resist Ana’s quiet beauty, wit, and independent spirit, Grey admits he wants her, too—but on his own terms. 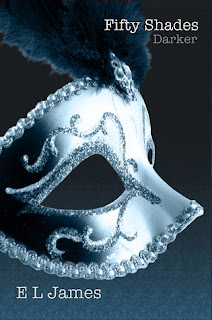 "Daunted by the singular tastes and dark secrets of the beautiful, tormented young entrepreneur Christian Grey, Anastasia Steele has broken off their relationship to start a new career with a Seattle publishing house.

But desire for Christian still dominates her every waking thought, and when he proposes a new arrangement, Anastasia cannot resist. They rekindle their searing sensual affair, and Anastasia learns more about the harrowing past of her damaged, driven and demanding Fifty Shades.

While Christian wrestles with his inner demons, Anastasia must confront the anger and envy of the women who came before her, and make the most important decision of her life. 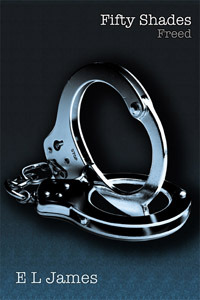 Now, Ana and Christian have it all—love, passion, intimacy, wealth, and a world of possibilities for their future. But Ana knows that loving her Fifty Shades will not be easy, and that being together will pose challenges that neither of them would anticipate. Ana must somehow learn to share Christian’s opulent lifestyle without sacrificing her own identity. And Christian must overcome his compulsion to control as he wrestles with the demons of a tormented past.

Just when it seems that their strength together will eclipse any obstacle, misfortune, malice, and fate conspire to make Ana’s deepest fears turn to reality.

My current literary obsession started with one article—a little "fluff" piece I read on my iPod early on the morning of March 23. I thought, "hmmmm, sounds intriguing" and I set off to learn more about the books. I noticed very favorable average ratings for all three books via my Goodreads app. I then skimmed through a few positive reviews. Next stop was Amazon where I encountered more positive ratings than negative. As usual, I avoided the dissenting reviews. Next, I visited the author's website—the idea for these books started out as Twilight Fan Fiction entitled Master of the Universe. I'm not interested in knowing what they were, even though, wait for it, I am a devoted Twilight fangirl! (No excuses. No apologies. This is no Twilight in the ratings department mind you. No mam. This is smokin' hot stuff! Ooh la la!) The Fifty Shades books were initially printed on demand by a small Australian publisher, and released as eBooks in 2011 and earlier this year (Fifty Shades Freed). Since first reading them I've done some exploring—I like knowing the facts. The author recently sold the movie rights to Fifty Shades of Grey to Universal Studios and Focus Films for an amount reportedly around five million dollars. The media has already dubbed the books "mommy porn" and some other frivolous terms. I will not be thinking of them in that way. There are already Fifty Shades Reading Groups, Facebook Pages, Pinterest Boards and more. I'm sure before too long there will be endless fan sites and Wikis and tons of merchandise for both the books and upcoming movie(s). That's cool. I already have a Twilight drawer, why not a Fifty Shades drawer?  Hmmm. I'll have to get rid of some clothes for that. ;) For now I have the three eBooks, a Pinterest Board, one magazine, and a vehicle sticker (see below). With the books still fresh in my mind I can recall enough to elicit chuckles, smiles, and tingles. And when I can no longer do that easily enough I can read them again. Woo hoo!

In one week I devoured all three books. Twice! No matter how enamored I've been of a book I've never turned around and read it immediately upon finishing. Okay, a first! Shall I keep track of the firsts as Christian and Ana do in the books? Maybe not. Are these books for everyone? Certainly not. Are they great fiction? Literature? No. Are they glorified fan fiction? Well, since I was not successful in reading beyond a few paragraphs the handful of times I attempted to read fan fiction I will say this, if I had read any "fanfic" that was this entertaining (yes, that is what these books are—entertaining escapism!) I probably would have read more. Personally, I feel those who will get the most, ahem, pleasure out of these books will be those who are or have been readers of the romance genre. Essentially that is what these books are. Oh, they are scorching, explicit, and descriptive, but still very romantic. Hearts and flowers romantic?  Not at first, but those of us who have read them are in the know about that, aren't we? I've read hundreds of romance books, mostly back in the 90's. I wouldn't consider myself a fan of the sweet, tender romances,  nor have I enjoyed the few I read that dealt with kidnapping, brutality, abuse, etc. So, even though I had previously not read books dealing with bondage and sexual sadism, not once did I find myself terribly horrified over anything that went on between Christian and Ana. That is likely due to the fact that the books are from Ana's point of view. I'm a woman. I think like a woman. I understood Ana's nervousness and hesitation. Her bewildering emotions regarding Christian, who as he confesses to her fairly early on is, "fifty shades of f****d-up." She's a nice young thing. A college student and lover of English Literature. A virgin. Yes, I believe there are 21 year old virgins out there. Although, I think taking her never-been-touched status to include by herself was a bit beyond believable. Oh well. Small detail.

When I say I breezed through these books I mean it. The overall style of writing was straightforward complete with pauses, stammers, and other speech variations that regular people display. I thought the prose was concisely descriptive. Enough to very effectively set the scene, but not enough to send me into a coma. Ana's inner dialogue (her subconscious and inner goddess) elicited my  inner chuckle numerous times. I thought including details like Ana's agonizing over how much five million dollars weighs and how large a carrier it would require was noteworthy. I didn't find myself stumbling over the structure or rhythm. This further allowed me to see their story quite vividly. There are phrases repeated a great deal, which I feel is fairly typical of books in the romance genre. And then there's the fact these are the same characters in three long books! Ana's unspoken exclamations, "Holy Crap", "Holy Sh*t", and "Holy F**k" show up frequently, but going from her quiet, sheltered existence to Christian's crazy life...well, I found them acceptable (and often cute).  I adored their sparring emails and that they most often referred to the other by title and surname, i.e. Mr. Grey, Miss Steele, and later, Mrs. Grey. I further appreciated the use of real world elements (places, vehicles, things). Isn't this the way we are in our "non-fictional" lives? I know I am. So, even though the people are fictional they are made more authentic by putting them into places (and vehicles), listening to songs,  and consuming things that exist in the "real" world. Furthering the mood of the books is the music. E.L. James gave Christian and Ana an appreciation of music, and to Christian, a way to express himself through playing the piano. (I recognized shades of the Edward Lewis [Richard Gere] character in Pretty Woman. And did you think of the movie, The Thomas Crown Affair, while Christian and Ana were soaring? I sure did!)  The author's website has detailed playlists for each of the books, which I found very helpful! I'm listening to my Fifty Shades Playlist as I write this.

The character of Christian Grey is a very complex one. He has many sides. I'm not going to try to describe all of his "shades." For the sake of fiction these parts of him are all extreme. That makes for interesting reading, and yes, fantasizing! Would he drive a normal woman crazy? Sh*t, yes! Anastasia Steele is a normal woman and he drives her crazy. She's completely out of her element with him. Who wouldn't be? Hence her need to consult with her subconscious and inner goddess all the time!!!  Christian though, he sees something in her: an unassuming, natural, intelligent, and innocent young woman. He completely disregards the women who see him for his beautiful face or his money, as well as the sexual predators. He is a product of his horrendous childhood and exposure to "Mrs. Robinson." He's made his personal life into a business where he hires submissives and has them sign non-disclosure agreements and contracts. His loving adoptive parents and siblings know nothing of his alternative lifestyle. He has a conscience. He warns Ana to stay away, but they uncharacteristically proceed. I think he sees Ana as someone (the only one?) who can save him—perhaps as a sort of beacon into the light. Even though he's been diagnosed as a self-loather he is apparently not without hope. So, yes, he is scary, domineering, controlling, curt, driven...but, he has many good qualities: philanthropist, benefactor, generous (but tough) employer, impeccable manners, gorgeous, and ultimately loving. Ana is there to help him see himself in a different light. He is "Fifty Shades" but not all dark. His world of power, money, business, security, and strictly contractual sexual relationships is the polar opposite of Ana's. She, who loves her mother, step-father, friends, and books. Ana, who thought a "playroom" was a place for video games. No, no, no. Not in Christian's world. Emotions are all over the place. This is a highly charged relationship. They are both having to compromise a great deal to remain together. She's all "Vanilla" and he's all "Dom." Together they settle on "kinky f*ckery." (Which will undoubtedly end up as one of the "it" phrases derived from these books!) Through all their ups and downs, their arguments, her tears, his frustration, and lots and lots of sex the not-so-unthinkable happens...unconditional love! And, because these are romance books the happily-ever-after ending happens too! *swoons*

UPDATE: Although I am a devoted fan of classic British (and selective contemporary) romances, thrillers, mysteries, historical fiction, and carefully chosen classics I am particularly enraptured with Christian and Ana's story. My feelings are so intense I have read the trilogy ELEVEN times since March 2012.