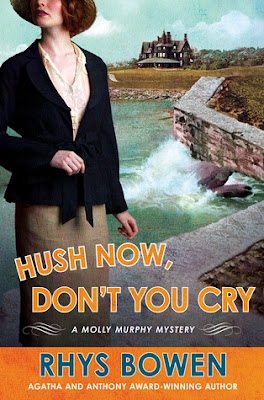 In the latest in Rhys Bowen's award-winning historical series, Molly Murphy is supposed to give up sleuthing now that she’s married, but the murder of an alderman puts her on the trail of a killer.
Molly Murphy, now Molly Sullivan, and her husband Daniel, a captain in the New York Police department, have been invited to spend their honeymoon on the Newport, RI, estate of Alderman Brian Hannan in the spring of 1904. Molly doesn’t entirely trust the offer. Hannan—an ambitious man—has his eye on a senate seat and intentions of taking Tammany Hall to get it. When Hannan is found dead at the base of the cliffs that overlook the Atlantic, Molly’s suspicions are quickly justified, and as much as she wants to keep her promise to Daniel that she won’t do any more sleuthing now, there isn’t much she can do once the chase is on. Rhys Bowen’s brilliant wit and charm are on full display in Hush Now, Don’t You Cry, another outstanding addition to her Agatha and Anthony award-winning historical series.
MY THOUGHTS (Short and Sweet)

If anything, being married has done nothing to hinder Molly's curiosity and need to find the truth. Daniel's being indisposed for most of the book allowed his new bride to explore, question, and solve crimes much as she did before marrying. She's a detective through and through. Acting like a wife? That will probably take several more books! Yippee!

Posted by Virginia Hill at 4:24 PM