Flip Sides of the Same Corgi

This little dog who is now sound asleep on the sofa next to me. Seemingly, without a care in the world. The same little girl that has, for some unknown reason, developed a phobia about drinking water. I mentioned in this post that she seemed nervous about drinking out of her ceramic water bowl due to the ceiling fan reflecting in the water. Well, that doesn't seem to be the reason. I removed the place mats from under her bowls. Nope, she's still afraid. I exchanged the cobalt blue bowl for a white one. Nope, still no good. I've been moving her food bowl into the center of the room and sitting with her while she eats. She WILL eat out of her food bowl, but with some trepidation. The other day she would still drink out of the water bowl if I swished the water with a finger first. I'm concerned that she isn't drinking enough. She doesn't appear to be dehydrated yet, but let's avoid that, shall we? I have gotten her to drink several times from a plastic food storage bowl, if I hold it over something dark; like her bed or the carpeted floor. She does have Keratoconjunctivitis Sicca (dry eye) in her left eye, which has to have affected her vision; but why would that all of a sudden cause this aversion to water?

She's had two extremely animated play sessions this morning. One with her Nylabone and one with her rope toy. I took her for a ride and for a walk this morning. Both times she was quite happy to go. Curious. Alert. Lots of "zoom-zooms" and wasn't particularly wary of anything. Hmmm. She ate her breakfast and a couple of treats. She drank a little water. She got some exercise. She's received lots of affection, and now she's napping. Sounds like a pretty good day for a doggy to me. I wonder what she's needing and not getting? 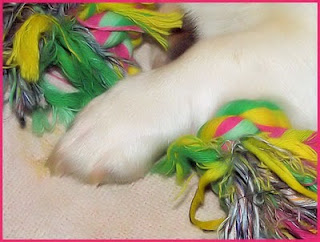