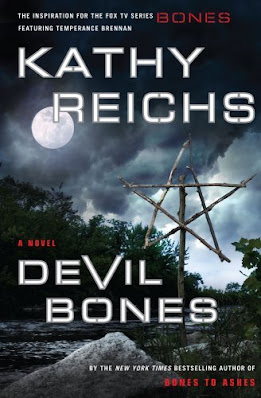 In a house under renovation, a plumber uncovers a cellar no one knew about, and makes a rather grisly discovery—a decapitated chicken, animal bones, and cauldrons containing beads, feathers, and other relics of religious ceremonies. In the center of the shrine, there is the skull of a teenage girl. Meanwhile, on a nearby lakeshore, the headless body of a teenage boy is found by a man walking his dog.

Nothing is clear—neither when the deaths occurred, nor where. Was the skull brought to the cellar or was the girl murdered there? Why is the boy’s body remarkably well preserved? Led by a preacher turned politician, citizen vigilantes blame devil worshippers and Wiccans. They begin a witch-hunt, intent on seeking revenge.

I think that the title is somewhat misleading (like others mentioned who have reviewed the book). Although the author offers some background into satanism that isn't what's at work here. Temperance is brilliant at her work, that's evident. However, I like the way Temperance's thought process in conveyed. The way she thinks and talks things through. The way she uses input from other sources to fill in the gaps.

I also like the way the author adds descriptive comments after dialogue or a physical gesture to elaborate. I feel she mixes the science, mystery, cultural (pop culture), and personal parts of her books really well. I'm a sucker for her chapter endings, which offer great incentive to keep going onto the next one. That's probably why I've read all of her books and am such a fan of the television show!

Temperance temporarily loses a battle with her personal demon (alcohol). She also struggles with her feelings for Andrew Ryan and someone from her past. Her daughter and ex-husband add to her dismay beyond the case and the violent death of a longtime associate.