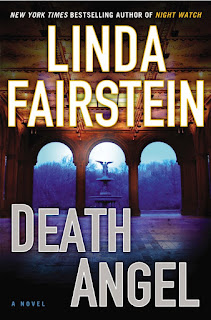 When the body of a young woman is discovered in Central Park, the clock begins ticking for Assistant DA Alex Cooper and Detectives Mike Chapman and Mercer Wallace to find the killer who has breached this haven in the middle of New York City. Is the body found in the lake, under the unseeing gaze of the Bethesda angel, the first victim of a deranged psychopath, or is the case connected to other missing girls and women in years past whose remains have never been found? Just as the trio gets their first lead, the investigation is almost derailed when Mike and Alex become embroiled in a scandal.

As Alex attempts to fight the accusations leveled against her and Mike, she follows clues that range from the park’s most buried — literally — secrets all the way to the majestic Dakota, which has experienced its own share of tragedies. When another young woman is attacked in the park, a new question arises: is this enormous urban park a sanctuary—as it seems to the thousands of New Yorkers and tourists who fill it every day—or is it a hunting ground for a killer with a twisted mind?

Once again, Linda Fairstein will thrill both longtime fans and new readers with an explosive page-turner filled with a shocking realism that only she can deliver.

As much as I love reading romance I still need my occasional mystery fix. I make a point to keep up with several mystery series, and the Alexandra Cooper Series is one of them. I've read books four through fifteen, and always find the history at the crux of each mystery compelling. I have never been nor have I ever planned to visit New York City, but I still find the city's history in each volume to be a strong attraction. Thinking back on each of the books I believe this one rates up there with the one I've considered my favorite to date, Entombed, the seventh in the series.

Not only did I find the supplied history of Central Park to be fascinating, but I really appreciated the detailed personal histories Linda Fairstein penned for her fictional characters.

I'm still bothered by Mike Chapman's continuing antagonistic treatment of Alex and I'm not sure the slight change in their relationship that occurred during this installment is good for the series' future. However, I won't let that stop me from eagerly awaiting volume sixteen, which will hopefully arrive next year.

Death Angel was a satisfying and entertaining read!

HIGHLIGHTS
"My relationship with Mike was a source of great amusement to many of our colleagues, who couldn’t figure how I tolerated his constant needling yet knew he’d covered my back in more situations than I could count." ~ Alexandra

"Harmless and homeless, or toothless and ruthless. Takes all kinds to survive on the streets of this city.” ~ Lt. Ray Peterson

“I can’t do Alexandra or Alex. Those names are for everyone else to use. ‘Coop’ is my own. I’m not the least bit confused about your gender identity.” ~ Mike Chapman

"I watched in horror as his foot caught between two of the rollers and he fell to his knees. “Stop it!” I screamed. “Stop the damn thing.” ~ Alex Cooper

Posted by Virginia Hill at 1:35 PM