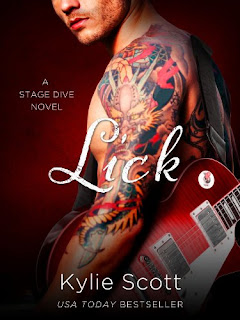 Waking up in Vegas was never meant to be like this.

Evelyn Thomas's plans for celebrating her twenty-first birthday in Las Vegas were big. Huge. But she sure never meant to wake up on the bathroom floor with a hangover to rival the black plague, a very attractive half-naked tattooed man in her room, and a diamond on her finger large enough to scare King Kong. Now if she could just remember how it all happened.

One thing is certain, being married to one of the hottest rock stars on the planet is sure to be a wild ride.

This is how it's done and done very well indeed. After a couple of bumps in my road to romance reader nirvana, I began reading Lick and almost immediately felt a sense of relief. I don't know how I would have handled another disappointment. Fortunately, Kylie Scott wrote a rockin' good read!

I really wasn't up for another angst driven book, but that didn't mean I wanted something light either. I think in David Ferris and Evelyn Thomas the author created characters that were neither damaged nor haunted, but rather understandably affected by some unpleasant events in their lives. David by desertion, cheating, and the "f*ckwittery" (concisely colorful description, BTW) he had to deal with as part of his celebrity, and Evelyn by a jerk of a first boyfriend and her father's plan for her life.

When Evelyn awakened on the floor of that Las Vegas hotel bathroom she most assuredly regretted tying one on for her twenty-first birthday. She also, through blurry eyes, realized that the man asking her if she was okay was "strangely familiar," beautiful, and not like anyone she'd ever met before. Yeah, David made a very pleasant first impression on me too. :) Before long she realized he should have been familiar, but couldn't recall the chain of events that led up to the shocking discovery...of the five-carat stunner on her left hand—"Holy sh*t!"


“Let me get this straight, you don’t remember anything?” “No,” I said, swallowing hard. “What did we do last night?” “We got f*cking married,” he growled.

Instead of wondering how on earth the aftereffects of this 'insta-marriage' were going to be explained I read on with acceptance. Their reactions didn't seem fictionally phony at all. David recalled everything and Ev didn't remember anything...at this point. What followed was the understandably intense display of emotions brought about by frustration and bewilderment.

Evelyn decided that whatever happened in Vegas was gonna stay there because she naively thought she would keep her marriage a secret. HAH! She planned to go back to Portland with her best friend, Lauren, resume her studies and her job as a barista. Meanwhile, David and his attorneys were to take care of the "mess" (divorce) in Los Angeles. Other than knowing her new husband's given name was David (I will leave it to you to discover how she learned that!) she was completely unaware of exactly who he was until she arrived at her hometown's airport. There she was immediately accosted by paparazzi and required a fast-thinking Lauren to get her outta there.


“Ev?” With a small smile Lauren patted my knee. “Did you somehow happen to get married while we were away?”

“So, who did you marry?” “D-David. His name is David.” “David Ferris, by any chance?” The name sounded familiar. “Maybe?”

“Do me a favor?” she asked. “Mm?” “Don’t break up my favorite band.” “Ohmygod.” I shoved the sunglasses back up, frowning hard enough to make my head throb. “Guitarist. He’s the guitarist. That’s where I know him from.” “Yes. He’s the guitarist for Stage Dive. Well spotted.”

So, not the criminal she absently considered—a rock star!

Evelyn escaped to her parents' house where her previously ordinary life further unraveled. Rather quickly David sent someone (Sam, the most polite, respectful, and likable bodyguard ever) to escort Ev to L.A. to sign "the papers." What followed her arrival in La La Land should have been enough to have her agree to anything and hurry home. Evelyn, however, showed gumption in the face of evil (um, the attorneys, and David's bitchy personal assistant) before being rescued by David's friend and bandmate, Mal.

David felt horrible about how Evelyn had been treated by his attorneys and he genuinely wanted her to remember why they decided to get married in the first place. He relayed to her how they met, and then what it was about her that attracted him to her. (I thought they were all wonderful reasons!)


“You treated me like a normal person. We just talked about everyday stuff. You weren’t angling to get anything out of me. You didn’t act like I was a different f*cking species. When you looked at me it felt …

It felt real, okay? It felt right. I don’t know how else to explain it.”

As David and Evelyn spent time together I found so many things I appreciated about them! Ev was mildly self-conscious, but not overly concerned about her appearance. Even when she was feeling overwhelmed or justifiably upset her "pity party" lasted only momentarily before she "pulled up her big girl panties" and moved on. She was not a doormat, but she was not unpleasant either. She was also good at self-evaluation and when she did something she considered wrong she tried not to repeat it—like drinking in excess.

David was moderately burned out and, I think because he immediately recognized how special Evelyn was, that he was subconsciously looking to change up his life. Even though David was presented as a very masculine guy who was not afraid to use strong language or his obviously bodacious charms, he still showed the ability to openly communicate with Ev. He intuitively exhibited patience and tenderness with her but was keenly aware when she wanted more. I don't recall him ever pulling the "celebrity card" on her and when a misunderstanding led to an estrangement he was willing to turn his life upside down to get her back. I liked how he was willing to be playful with Evelyn and how he gently coaxed her into recalling more of the events from the night they married. Something else I found enjoyable was the playfully crude teasing and obvious camaraderie between David and his friends. Mal, in particular, was very entertaining!

The fact that David wrote and performed beautiful music for Evelyn sure didn't hurt his prime book boyfriend status either. *swoon*


“Hi. Sorry to interrupt, folks. My name’s David Ferris and I’d like to play a song for my wife, Evelyn. Hope you don’t mind.” Stunned silence broke out into thunderous applause. David stared at me across the sea of people as everyone swamped the dance floor to get closer. “She’s a Portland girl. So I guess that makes us in-laws. Be gentle with me, yeah?”

One thing I was hoping would happen that didn't in this book was a wedding ceremony that included friends, family, and a sober bride and groom. Since this is book one in the Stage Dive series, maybe that will happen in an upcoming release. There should be three more, because Jimmy, Mal, and Ben need to find their own Evelyns!

So, five shiny (rock) stars for sharp writing, clever dialogue, great chemistry, an extremely likable heroine, and all that is David Ferris!

Posted by Virginia Hill at 3:00 PM