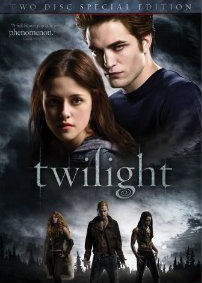 I wasn't in so much of a bubble that I hadn't heard of the Twilight books or the movie. I rarely go to the theater. When I do it's with my husband and usually to see the latest Harry Potter movie.

Twilight was released to DVD on March 21.  I told my husband that I wanted to see it so he rented it at the local video store for me. On Sunday, my house-all-to-myself day, I watched it for the first time. I think because I had not read the book(s) or any reviews of either the books or movie, I didn't have any true expectations.  For this I am so R-E-L-I-E-V-E-D!

I can't put into words my immediate and overwhelming fixation with the movie (I'll get to the books in a bit); but promptly after watching it I downloaded the Twilight soundtrack from iTunes.  On Monday, my husband bought Twilight on eBook for me. On Wednesday I got the other 3 eBooks.  I've been scouring the Internet for all things (positive) Twilight since.

In one week I've watched the movie 9 times, the special features 3 times, read all four books, and have the soundtrack playing nearly non-stop! I've got the movie, soundtrack, and all 4 books on my iPod so I can escape into my own "Twilight Zone" almost anytime I want.  *sighs*

I didn't think Robert Pattinson was any cuter than the rest of the young cast members in Harry Potter and the Goblet of Fire. He was attractive but so young and definitely not SPARKLING!  As Edward Cullen though...oh my! He is quite stare-worthy. At this point in time I have not become overly critical of the movie. There are definitely issues with continuity, script, and bland performances, but I still LOVE IT!

Believe me when I say that something like this has NEVER happened to me before. I talked to my oldest sister on Friday and told her of my Twilight obsession. She said something like, "If it makes you happy, then what's the harm?" and "You've been so serious all your life; you should have fun with this now."  I'm old enough to be Bella's grandmother! What really counts is that I'm not old enough to be Edward's grandmother.  Not technically.  So, I'm going to allow myself to be majorly crushing on that gorgeous, smoldering, sparkling character.  *swoons*

I ordered Twilight: The Complete Illustrated Movie Companion from Amazon and it is due to be delivered tomorrow! I can hardly wait! This is the first movie I've watched that I feel compelled to purchase merchandise for.

My husband has watched it twice and gave it four stars. So, he likes it, but he likes LOTS of movies. My daughter saw it on Saturday (after my husband and I both issued caution regarding Bella's behavior with Edward).  She LOVES the soundtrack and enjoyed the movie, but she's not obsessed LIKE HER MOTHER IS! It's almost embarrassing. I'm not going to admonish myself for this because I think I do deserve this little bit of Twilight happiness.

There is a quote, that is one of my favorites:

I've learned that Twilight has made me feel youthful and giddy. That swooning feeling ain't bad either!

Re: the books. Sci-fi/fantasy are definitely not my favorite genres, but I was able to concentrate on the human characteristics rather than the whole vampire thing. Twilight is my favorite by far. I rated the books as follows:

Twilight (5 stars - Loved it!)—Bella and Edward meet. We are along for the amazing ride!
New Moon (4 stars -  Really liked it)—The absence of Edward was deeply felt. :(
Eclipse (4 stars - Really liked it)—Exciting? Yes. Don't understand the whole Jacob detour.
Breaking Dawn (3 stars - Liked it)—I would have appreciated it much more had it continued only from Bella's point of view and featured less detail about Renesmee and the visiting vampires.

Okay, so there it is. My confession. I won't apologize and I only ask that you be kind.  I have a deep seated fear that any negative vibes I get will extinguish MY (Twi) light.
Posted by Virginia Hill at 1:35 PM