Book Review: Hard As It Gets by Laura Kaye 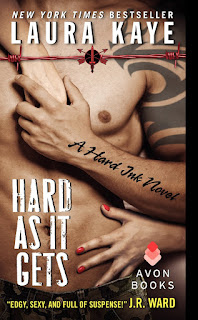 Trouble just walked into Nicholas Rixey's tattoo parlor. Becca Merritt is warm, sexy, wholesome--pure temptation to a very jaded Nick. He's left his military life behind to become co-owner of Hard Ink Tattoo, but Becca is his ex-commander's daughter. Loyalty won't let him turn her away. Lust has plenty to do with it, too.

With her brother presumed kidnapped, Becca needs Nick. She just wasn't expecting to want him so much. As their investigation turns into all-out war with an organized crime ring, only Nick can protect her. And only Becca can heal the scars no one else sees.

Desire is the easy part. Love is as hard as it gets. Good thing Nick is always up for a challenge...

Hard As It Gets is the first in a projected new series of four books by Laura Kaye. It is a 373 page romantic (erotic) suspense set in Baltimore, Maryland. The hero is Nick Rixey, an ex-soldier in Army Special Forces driven to take an Other Than Honorable discharge, and who is now co-owner of Hard Ink Tattoo. The heroine is a nurse, Becca Merritt, whose missing brother left her a note to go find Nick. She was also the daughter of Nick's late commanding officer, a CO who Nick and the other surviving members of his team knew to be at fault for the lethal ambush that changed the course of their lives. The secondary characters are Jeremy Rixey, Nick's younger brother and business partner, Jess, Nick and Jeremy's employee, Miguel Olivero, a private investigator friend of Nick's, and Nick's ASF buddies, Beckett Murda, Edward Cantrell, Shane McCallan, and Derek DiMarzio. The main plot covers the course of action taken by Nick, Becca, and his team to find and rescue Becca's brother, Charlie. The goal of the story is achieved, and this installment concludes in a positive way.

Hard As It Gets is the fourth book I've read by Laura Kaye; I enjoyed the preceding three (Her Forbidden Hero, One Night with a Hero, and Hearts in Darkness) very much! Couple that with this book being categorized as romantic suspense, my favorite genre, I'd say the odds were in my favor to find it amazing!

First, I'd like to mention how much I liked and admired the hero, heroine, and all the secondary characters in this novel. It was a pleasure getting to know them, and in a fancifully immersed reader kinda way, I felt honored to spend time with them. Beginning with the heroine, Becca Merritt, I'd say she is an ideally written female protagonist of this genre: capable, intelligent, and confidently sexy. Further, she shows remarkable control during several dangerous situations; but once the immediate danger is over, she allows herself to be comforted by the hero.

For example, here is what Nick thinks of Becca's self-control:


She’d called for help. Armed and defended herself. And held it together when help arrived. Smart f**king girl.

And an example of how she accepts Nick's tenderness:


“I’m not crying,” she said despite the wetness plain on her face. She shook her aching head, then pressed her cheek into his hand. “I’m not.”

She's a nurse so she can patch up the heroes when they're injured. She also allows herself to overreact during highly emotional moments but feels bad about it afterward.

She has an unassuming sense of humor that often surfaces when she's nervous.


Jess: “Because, unlike you, I had sex last night and the guy ripped my thong off. Are you satisfied?”
Jeremy’s expression froze.
“Probably not as well as you are,” Becca said.

She's not afraid to tell the hero what she wants, but I didn't find her behavior smutty.

I repeat. I really liked her. Now, on to Nicholas, excuse me, Nick—he hates to be called Nicholas: six foot three inches, chocolate brown hair, light green eyes, very muscular, has tattoos, does tattoos, drives a Dodge Challenger, and then there are all the wonderful character traits. Oh my, he is a hero in every (romantic) sense of the word. *fanning myself* He may be weary and jaded, but he is not entirely closed off. He has these words tattooed on his side, and they speak volumes toward his character:

Living life by his strong moral code doesn't mean Nick won't be respectful when he talks dirty to Becca. :)


“Because I want to make you hold onto that bag while I bury myself in you so hard and so deep you don’t know your own name. But then tomorrow, in the light of day, when your brother’s still missing and we’re still trying to figure out the mystery of who broke into your house, getting f***ed by a stranger in a warehouse will be just one more thing you have to deal with. And I won’t do that to you.”

When Nick's buddies show up to help find Becca's brother, Charlie, well, all that romantic hero goodness gets multiplied by four: Beck, Easy, Shane, and Marz are gallant and gorgeous! (Just a thought that has me a tad bit concerned: Laura Kaye says there will be a total of four books in The Hard Ink Series, yet there are five handsome heroes. :\ )

I think Ms. Kaye does an outstanding job keeping the storyline suspenseful. There are clues to decipher and several edge-of-your-seat violent confrontations. In between those immediately dangerous times and the looming concern for Charlie's well being, there are several lighthearted moments—some much-needed levity, like this:


“You seriously do ink?” Shane asked, hiking Becca’s medic kit on his shoulder.

Rixey braced. Oh, goody, something else for him to ride me about. “Yeah, I seriously do. Occasionally.” He shrugged.

“Bare some skin and find out.”

Shane grinned, his expression making it clear he enjoyed harassing Nick. “If you wanna get me out of my clothes, lovah boy, you gotta wine and dine me first.”


What I Liked: Jeremy's naughty novelty shirts, Jess's ribald sense of humor, the page-turning chapter conclusions, the sharp writing and editing, and the delightfully fresh "soldier speak" the guys used to communicate with each other.

The Next Installment: Hard As You Can has a release date of February 25, 2014, and will feature Shane McCallan as the hero.


Frank Merritt had stolen his career, his reputation, six of his best friends, and his f**king ability to sit or stand for any length of time without wanting to whimper like a little girl. ~ Nick
~*~
I can’t believe I’m doing this. It was like an episode of Nurses Gone Wild. If such a show existed. Which it probably did. ~ Becca

“Damn,” Jess said, plopping onto one of the couches. “I think I should’ve joined the Army. Cause I would ride that convoy all day long.” Her face squinched up. “Not Nick, I mean. Just, you know, the other three.” ~ Jess
Posted by Virginia Hill at 2:23 PM