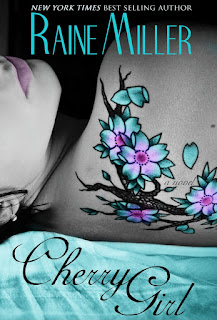 Elaina Morrison has loved Neil McManus her whole life. She doesn’t remember a time when she didn’t love him. Through heartbreaking tragedy and years of separation, her love holds true…until life stomps all over her heart, shattering her perfect dream, teaching her how hard it is to let go.
Real life doesn’t have anything on romantic dreams though, as these two have learned over and over again. It sucks big time, leaving painful scars in its wake.

But Neil isn’t giving up. He’s a soldier who has endured years of longing and sacrifice to wait for her. He’s fought his way through battles before and this is one he can’t afford to lose on any level.

Neil McManus is going in fighting to make Elaina see what he already knows.
That she will forever be his Cherry Girl...

Cherry Girl is a 304-page contemporary erotic romance. It is the story of Neil Emmett McManus and Elaina Morrison: how they meet, how their relationship evolves, how Elaina's misinterpretation of an event keeps them apart for years, and what they do to get back together again. The epilogue is satisfyingly romantic and offers a promising happy-ever-after for the hero and heroine. It is in first person narrative from both Neil and Elaina's rotating points of view. It is set in London, on the Somerset coast, and in Scotland. Secondary characters are Ian Morrison, Elaina's brother, Caroline Morrison, their mother, Denny Tompkins, Elaina's ex-boyfriend, and Ethan Blackstone, who was a fellow army officer of Neil's and his current business partner.

I think Raine Miller surprised the majority of us fans with the announcement that this book would be the next to be published and not Rare and Precious Things, which is Ethan and Brynne's fourth book. I'm looking at Cherry Girl like a surprise gift, especially knowing that more Ethan and Brynne are still in the works.

This is a very quick read, and any and all comparisons to the preceding books in the series are quite all right with me. :) Language, locations, alpha-guy, beautiful girl, sizzling sex...see, all good things to read more of! Neil is an enticing mixture of sentimental, considerate, responsible, and sexy! For some reason, Raine Miller's dirty-talking British blokes are so fun to read! I enjoyed the beginning of the story through Elaina's point of view. She is very young when she meets Neil, and her sense of awe of him was well expressed. Neil, being seven years older than Elaina, treats her more like a younger sister until she turns eighteen.

There is much I like about Elaina: her enduring affection for her father, her ability to move beyond devastating heartbreak, and her episodes of blushing and shyness with Neil. However, when she clearly jumps to conclusions regarding Neil and an ex, well, that just causes all kinds of suffering for her and Neil—six bloody years worth! GAH!

If you require conflict in your books, there you go; you get plenty of it. I was scolding Elaina like crazy! Why on earth wouldn't she talk to Neil? She just flies off the flighty-girl handle and just...leaves him?! Grr. He, being quite the romantic sort, can't get his "Cherry Girl" out of his mind—or heart. Thankfully, Ms. Miller deftly moves the plot along during those years of separation.

Fortunately, Elaina's mum wants the man she loves like a son and her daughter to get back together. She, a friend, and Ian conspire to get Elaina a job as the receptionist at Blackstone Security International, Ltd. Well, guess who also works there? Surprise, surprise! This is just the nudge Elaina and Neil need to work things out. And work it out they do by finally talking about what happened. After they talk and vent their frustrations they pick up where they left off six years before with that amazing sexual chemistry.

Elaina has a painfully difficult task to handle, and I was quite pleased with how supportive and comforting Neil's part in that was written. Also, the romantic getaway he planned following that task was very swoony!

All-in-all I enjoyed getting to know the history of these two supporting characters in the previous Blackstone books. I look forward to the possibility of checking in with them when Rare and Precious Things is published.

What I Liked: The gorgeous cover and pretty graphics announcing whose point-of-view was upcoming. The story is divided into four segments: Elaina, Neil, Us, and Epilogue. The heat factor between Neil and Elaina. Neil's nasty British mouth, although I don't think he can hold a candle to Mr. Blackstone. ;)

What I Didn't Like: Elaina's calling Neil "babe" at the start of their romantic relationship; it did not ring true to me. The entire book was double spaced, which meant a lot of page advancing on my small reading device.

I Would Recommend it to Mature readers due to the graphic language and sexual content. Anyone who loved the first three Blackstone Affair books: Naked, All In, and Eyes Wide Open.

The Next Installment: It appears that Rare and Precious Things will be #4 in The Blackstone Affair Series and may be available in February 2014.


Neil called me Cherry Girl due to the colour of my hair. I’d have to agree with him on that. My hair was pretty much the colour of one of those dark cherries—nearly black with an undertone of deep red running through it. ~ Elaina

So, we had finally found our way to this point together, bodies aligned, key to lock, lover to lover. ~ Neil

Bloody hell, I looked a fright. Like a cross between a bush baby and Lily Munster... ~ Elaina

Ethan: “How did you know you loved Elaina?”

Neil: “It’s not something you have to figure out, E. The decision is made for you. When the right girl comes along… you’ll already know.”

Posted by Virginia Hill at 1:20 PM