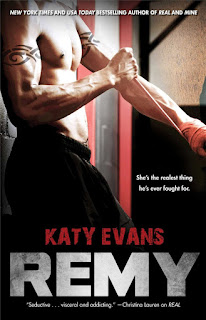 Underground fighter Remington Tate is a mystery, even to himself. His mind is dark and light, complex and enlightening. At times his actions and moods are carefully measured, and at others, they spin out of control.

Through it all, there's been one constant: wanting, needing, loving, and protecting Brooke Dumas. This is his story; from the first moment he laid eyes on her and knew, without a doubt, she would be the realest thing he's ever had to fight for.


SUMMARY
In this self-titled third installment in The Real Series, we experience how dramatically life has changed for Remington Tate since meeting Brooke Dumas. In first-person narrative and in alternating points in time—past and present, Remy recounts the story of their first meeting, their intense relationship, traveling and fighting on the Underground circuit, the birth of their child, and their wedding. Most of the book takes place in hotels and Underground rings around the country. At 272 pages, this is an intense several-hour read. Remy's devoted team: Pete, Riley, Lupe, and Diane are present, as are Brooke's best friend, Melanie, and sister, Nora. The final chapter is in Brooke's point-of-view and ends in a perfectly proprietary way!


MY THOUGHTS
Remy arrived on my reading device early in the morning and, by 4:30 a.m, I was already several chapters in. This is REMINGTON TATE here folks—sleep does not matter! As much as I am smitten with Remy, I am inexplicably infatuated with him and Brooke as a couple. I think the word primal is most often used to describe Remy; he does rely heavily on his instincts—for survival, fighting, and loving his Brooke. Remy is all about stalking, scenting, feeding, protecting, and mating with his woman! But, here's the thing—Brooke is his warrior woman, his "Little Firecracker" and she is just as protective of her man. That she is willing to fight for him, care for him, and worry about him, makes her his "Mine."


...she loves me, and she’s all I’ve ever wanted. Stronger than I imagined, more female than I ever imagined. Funny and nurturing, vulnerable and sassy. I love her so much my chest hurts...

In this series there are several points of conflict; the most powerful one, in my mind, is Remy's conflicting moods—his bipolar disorder: mania ("speedy") and depression ("black"). His self-awareness serves him well. He takes care of his body, he has a dedicated team, and in Brooke (and Racer) he has the loving family he'd not had before.

Nobody told me I was a fighter, or that I could be a friend, a son, or a companion. All the medics told me was I was bipolar.


The other major conflict has to do with his evil opponent, the antagonist in the series, Benny the Black Scorpion; every time he is mentioned the story becomes ominous. His toxicity knows no bounds when it comes to Remy and those Remy cares about. In this conflict, Remy certainly prevails because Riptide stings The Scorpion into submission in the rather gruesome "anything goes" championship fight.

Things I Liked: I found Remington's narration and inner dialogue captivating, albeit extremely, um, colorful! For a man of few words, Katy Evans did him proud! In general, I don't care for flashbacks and the like, but I feel the story is enhanced by repeatedly alternating between past and present. You know how sometimes romance books about a couple stray away from that couple...a lot? Well, that did not happen here. :) This is pretty much Remy and Brooke all...the...time. ::::::SQUEEEEEE::::::

Things I Did Not Like The proper noun, "God," not being capitalized many, many times! Several instances of one and two-word sentences, which I had difficulty articulating.


I Would Recommend it to Mature readers (18+) who would enjoy a story with an impassioned and primal couple, lots of dirty talk and expletives, and the whole gorgeous fighter thing.

The Next Installment: Rogue is the fourth book in The Real Series and has a scheduled publication date of July 29, 2014.


HIGHLIGHTS
I’ve fought all my life to stay sane. To keep focused, driven, and centered. But tonight, I fight to show one woman my worth. ~ Remy

I’m drawn to her strength and her sweetness, her bravado that makes me want to push and tease her, that draws me out of my own cave, my own walls, if only just to chase her and bring her back to my cave with me. ~ Remy

I feel her softly kiss the top of my head as she runs her fingertips through my scalp. This is the way I want to die one day. With her at my side, our bodies touching. I won’t need to say anything, and she won’t need to hear it, because she gets me. ~ Remy

And my brain goes quiet and my heart is calm and my life is at a standstill, and the pendulum that I am, all the swinging to and fro, finally stops and I feel like I finally found my center. ~ Remy 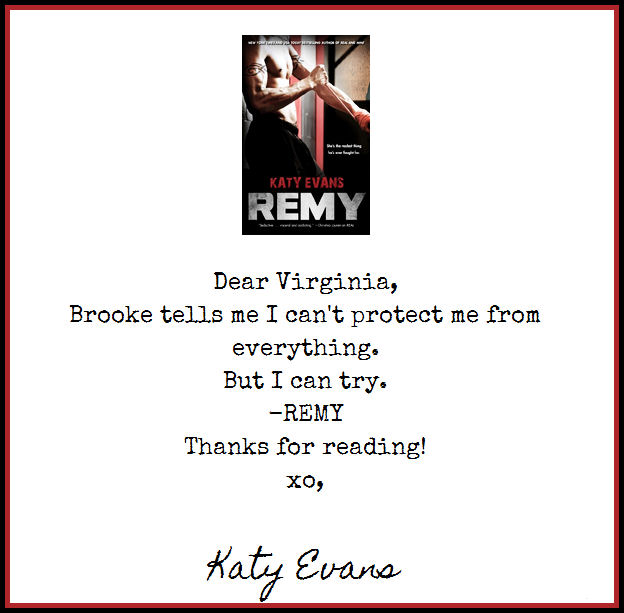 Posted by Virginia Hill at 6:21 PM