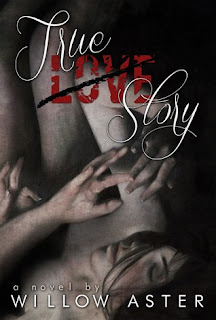 Growing up in an idealistic home, Sparrow Fisher is sheltered and innocent. When she meets Ian Sterling, a musician who is rising in popularity, she instantly falls for his charm. They run into each other over the next few months and eventually begin an unconventional relationship.

At different places in their lives, Sparrow is off to college in New York, and Ian is traveling the country with the band. When they see each other, all seems wonderful and lighthearted, but when they’re apart, Sparrow is left to wonder if Ian really cares about her the way he says he does, or if she’s just another pretty face to him.
Once their relationship steadies, they’re both happier than they’ve ever been, and it’s hard to not get caught up in the magic they have together. Until something so devastating comes to light that threatens to shatter everything they’ve built with each other.

True Love Story is a story about the real highs and lows that come with a relationship—happiness, pain, angst, and finding out if love really is enough.

This impressive debut standalone novel with a first-person narrative began with the announcement of how much time had elapsed since the lovers had last seen each other since the young woman had become aware her love had broken her heart, and since they had first met…

Sparrow Kate Fisher officially met Ian Orville Sterling when she was a very mature 18-year-old and he was…much older, but not quite as mature.  He was a well-known and highly respected musician and songwriter.  He was also unbelievably attractive and had a way about him that knocked the no-nonsense and well-grounded Sparrow off her perch.  The first time they touched, her skin “blazed” and after their sedate introduction, she atypically blurted out something she would otherwise never have said out loud. Yes, that’s how much he affected her!

Ian unashamedly flirted with her while her parents, his cousin and his wife, and her boyfriend were seated at the table with them.  She thought herself a “horrible person” because she loved his audacity.  Ian was immediately taken with her and set about asking questions and using body language that set Sparrow’s heart pounding.

Ian came into Sparrow’s life as she and her best friend, Tessa, were preparing to leave home in San Jose, California for New York City, where Sparrow would be taking literary courses at NYU.  Sparrow was very much the product of her proper upbringing. She considered her parents “wonderful.”  Her father was a pastor and she felt her only job being a pastor’s daughter was to be "perfect."  She didn't use curse words or slang—preferring “meaningful” words instead.  Her love of books, reading, and writing was evident in how effectively she was able to express herself.  In fact, as a songwriter, Ian was no slouch in the area of communicating – orally and in writing.

Sparrow brilliantly used what she called a contradiction game to list the pros and cons of that first meeting.  She also had to deal with Michael, her boyfriend, who had feelings for her much deeper than her own for him.  Although Michael may have appeared to be the perfect match for Sparrow, her feelings for Ian defied that logical fit.  She daydreamed about Ian constantly and ended up shooting down Michael’s plans for their lives together.  Tessa’s unfailing friendship and the support of her disappointed, but loving parents got Sparrow through the period following the break-up with Michael.  Then Ian made another appearance which left no doubt for either of them that there was something serious happening between them.  After spending one magical day with Ian in San Francisco, she and Tessa were off to New York.  They settled into their tiny NYC apartment and Sparrow, still constantly thinking of Ian, committed herself to her classes.

She didn't hear from the constantly traveling Ian, but a ski vacation at Christmas had them spending time together.  Their shared chemistry was still evident in every interaction and in their first kiss, which had Sparrow further wondering why he hadn't once contacted her.

While Sparrow and Ian seemed to communicate comfortably with each other verbally, there was loads of sexual tension!  There were multiple instances where things he said to her caused her to get “splotchy” with embarrassment and him to tug at his hair when flustered.  I found both traits to be quite endearing!

Upon returning home to New York, she attended a party where she met a music producer named Asher Caldwell at his big New Year’s Eve party.  Even though he was handsome and wealthy, she couldn't help finding him wanting when compared to Ian.  They talked and danced and, at midnight, kissed.

I don’t think Sparrow knew exactly what kind of relationship she wanted with Ian, and Ian had never “done relationship.”  Despite their obviously strong feelings for each other, his traveling and apparent inability to stay in touch constantly left Sparrow wanting more. She was confounded that he would be so affectionate and loving with her during their brief and infrequent encounters and then disappear for months with nary a word.

As the story progressed, Sparrow was left dealing with the aftermath of a bewildering, life-changing event and the most painfully disappointing desertion by Ian yet.  The author did a masterful job of writing Sparrow’s desolation, anger, and frustration.  Fortunately, when Sparrow and Ian are reunited, they are able to very effectively express themselves.  I felt a strange sense of pride in Sparrow when she finally “tells off” Ian, and equally a sense of relief when he finally explains his behavior and about his childhood.

Ian’s hectic musical career had him traveling constantly away from Sparrow for extended periods of time.  When they decided to try for a long distance relationship, Sparrow asked Ian for a commitment – she needed him to call her more often.  He was able to get past his lifelong issues and do just that.  Yay!  Things were finally looking up for them!

Their relationship happily progressed; Sparrow graduated and received wonderful news about her first book.  Ian’s career was burgeoning and then, WHAM, a painful confession tore them apart.  What followed this devastation was page after page of voicemail transcriptions and letters from Ian to Sparrow where he spilled his heart and soul out to her.  Keep the tissues handy because if you’re as affected as I was, you will be crying.

A completely devastated Sparrow went back to California and attempted to get on with her life.  One way she tried was to date several different men, though she could not help but make comparisons to Ian.  In that regard, they were all found lacking.

Tessa’s wedding to Jared required Sparrow, as the maid of honor, to travel to New York with a change of planes in Texas.  This event’s chapter may have been titled “Layover in Hell,” but really it was more like divine intervention, as Ian was departing Texas for New York and amazingly had the seat right next to Sparrow’s!

Thus, after not seeing each other for one year, two months, and seventeen days, Sparrow and Ian had arrived at exactly the right place and time open to the possibility of living their own True Love Story.  In other words, they found their perfect happily-ever-after!  (The epilogue was awesome!)

As impressed as I was with the writing, story, and characters, I also thought the editing and technical aspects of the Kindle edition were outstanding – I can’t recall a single typo, misspelled word, or obvious (to me) grammatical error.  I also cannot remember ever reading a more beautifully formatted digital book.  The lovely chapter title graphics and spacing were pleasingly consistent—it looked and read wonderfully on my iPod.

"A wedding would have been fun ... besides that one little complication of you being married afterwards." ~ Tessa
~*~

I thought it was brilliant how the author wrote Ian's side of a couple telephone conversations overheard by Sparrow. One example:

“He reaches over and grabs my hand and laces our fingers together. 'You're gonna break my heart, Sparrow Fisher.' And I think, not before you break mine.” ~ Sparrow
~*~

“Little Bird, our love has been hard-earned from the very beginning. It is more precious to me than anything on earth. I can't just let go of it. And I won't stop fighting for it. ~Ian"
~*~

“You may have to break this heart before you can use it. You may have to take it apart and start all over with me. I know it hurts to change, but I don't want to stay the same. Take me. Break me. Do whatever it takes to make me what you need me to be.” ~ Ian
~*~

"Love is enough. Love does conquer all. Love really does always protect, trust, hope, persevere...I'd even go as far as saying that love never fails. I finally believe that."
~ Sparrow

Posted by Virginia Hill at 8:55 AM