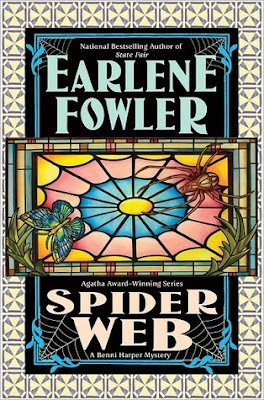 Folk art museum curator, rancher and sometime sleuth Benni Harper is back in an unforgettable new mystery, organizing a Memory Festival. But a sniper threatens to make it a day to remember in the worst way… Benni and the ladies of her Coffin Star Quilt Guild are excited to display their Graveyard Quilt at the first ever San Celina, California, Memory Festival. The fair promises to be a moving event celebrating memories through quilts, crafts, scrapbooks, photographs, written word, oral histories, and tributes to loved ones.

But when a local cop is wounded by a mysterious sharp shooter with a vendetta against the police, Benni fears for her loved ones—especially her police chief husband, Gabe. Soon Benni is drawn into the search for the sniper, determined to make her hometown safe again…before their peaceful street fair becomes a shooter’s deadly target range.

MY THOUGHTS
I'm having mixed emotions regarding this fifteenth Benni Harper Mystery. I very much enjoyed it and feel it may be tied with Mariner's Compass as my favorite of the series. So, that explains my delight. Now, here is the reason for my angst. I fear this may be the final book in the series. Earlene Fowler did a Facebook Status update on August 4, where she stated she might not be publishing for a while (after The Road to Cardinal Valley is released in December). That along with Spider Web's comprehensive epilogue leads me to believe I've just closed the book on a seventeen-year-long friendship. If this is indeed the end I must say it was beautifully finished.

There are two distinct mysteries—one to do with a sniper and the other to do with a new woman in town. Benni is in the thick of things and curious, as usual. I particularly enjoyed the preparations and interviews for a book that Benni is helping Isaac with, and for the theme of the Memory Festival. Benni is all about history: recording and preserving it and respecting traditions. As usual, she is busy with her job, friends, family, and involved in a mystery. Gabe is having violent stress-induced nightmares (triggered by the sniper attacks) that leads him to protect Benni by sleeping apart from her. They deal with it the best they can, and ultimately Gabe seeks the help of a psychiatrist Benni had recently met. Although that female stranger has a connection to someone important to Benni it is not in the way she imagines. There are significant changes ahead for Benni and her family at the close of this story, but nothing will ever change the true nature of these colorful and respectable characters. How I've enjoyed my time with them!

Posted by Virginia Hill at 6:47 PM