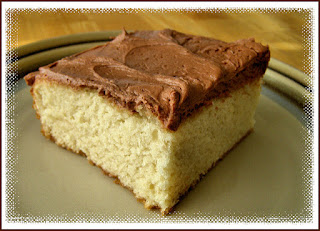 First time with this recipe from have your cake and vegan too by Kris Holechek. For convenience I baked it in a 9 x 13" glass baking dish that had a cover. I ended up letting it remain in the dish to cool which probably contributed to the bottom and sides becoming a tiny bit overdone. The cake had a lovely substantial texture rather than being fluffy. I made note that the frosting recipe needs to be doubled. A single batch was insufficient to cover just the top. It was still moist and flavorful several days later. Yum!
Posted by Virginia Hill at 10:03 AM