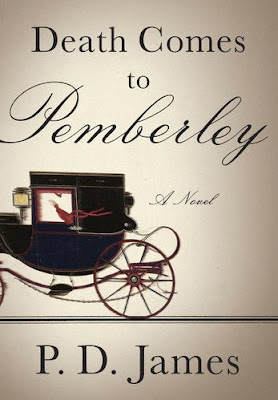 A rare meeting of literary genius: P. D. James, long among the most admired mystery writers of our time, draws the characters of Jane Austen’s beloved novel Pride and Prejudice into a tale of murder and emotional mayhem.

It is 1803, six years since Elizabeth and Darcy embarked on their life together at Pemberley, Darcy’s magnificent estate. Their peaceful, orderly world seems almost unassailable. Elizabeth has found her footing as the chatelaine of the great house. They have two fine sons, Fitzwilliam and Charles. Elizabeth’s sister Jane and her husband, Bingley, live nearby; her father visits often; there is optimistic talk about the prospects of marriage for Darcy’s sister Georgiana. And preparations are under way for their much-anticipated annual autumn ball.

Then, on the eve of the ball, the patrician idyll is shattered. A coach careens up the drive carrying Lydia, Elizabeth’s disgraced sister, who with her husband, the very dubious Wickham, has been banned from Pemberley. She stumbles out of the carriage, hysterical, shrieking that Wickham has been murdered. With shocking suddenness, Pemberley is plunged into a frightening mystery.

Inspired by a lifelong passion for Austen, P. D. James masterfully re-creates the world of Pride and Prejudice, electrifying it with the excitement and suspense of a brilliantly crafted crime story, as only she can write it.


MY THOUGHTS
I really wanted to like this book. I love mysteries, and, of course, Darcy and Elizabeth. What happened? Was it the lack of a compelling enough mystery? Definitely. Of course, I wanted to find out what happened to Denny. I never believed Wickham had killed his best friend. The murder, as confessed by the perpetrator, read like a whim to me. The motive? Unsubstantiated as to exactly what had occurred and who was at fault. Revealing that Denny was innocent of all but his association with the "wrong sort."

I also felt the explanations offered by Wickham, Colonel Fitzwilliam, and Darcy for their past decisions and actions were disappointing. I was looking for more mystery. More meaning. More oomph.

I did like discovering more about the characters as created by P.D. James but found some of her insights into the characters, completely of Jane Austen's creation, to be disturbingly different from my own. I'll always prefer the Darcy and Lizzy of Jane's imagination, but that doesn't mean I don't want to explore other authors' interpretive works.

Posted by Virginia Hill at 2:14 PM