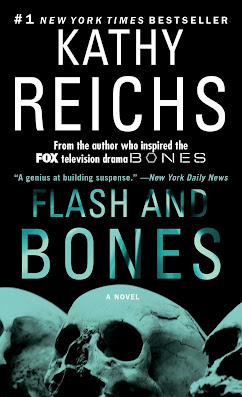 Just as 200,000 fans are pouring into town for Race Week, a body is found in a barrel of asphalt next to the Charlotte Motor Speedway. The next day, a NASCAR crew member comes to Temperance Brennan’s office at the Mecklenburg County Medical Examiner to share a devastating story. Twelve years earlier, Wayne Gamble’s sister, Cindi, then a high school senior and aspiring racer, disappeared along with her boyfriend, Cale Lovette. Lovette kept company with a group of right-wing extremists known as the Patriot Posse. Could the body be Cindi’s? Or Cale’s?

At the time of their disappearance, the FBI joined the investigation, only to terminate it weeks later. Was there a cover-up? As Tempe juggles multiple theories, the discovery of a strange, deadly substance in the barrel alongside the body throws everything into question. Then an employee of the Centers for Disease Control and Prevention goes missing during Race Week. Tempe can’t overlook the coincidence. Was this man using his lab chemicals for murder? Or is the explanation even more sinister? What other secrets lurk behind the festive veneer of Race Week?

A turbocharged story of secrets and murder unfolds in this, the fourteenth thrilling novel in Reichs’s “cleverly plotted and expertly maintained series” (The New York Times Book Review). With the smash hit Bones about to enter its seventh season and in full syndication—and her most recent novel, Spider Bones, an instant New York Times bestseller—Kathy Reichs is at the top of her game.

After reading three lovely works of literature in a row I was more than ready to dive into the latest Temperance Brennan mystery. I really do enjoy this series and have since reading the first book in 1998. I find Kathy Reichs' "bare bones" descriptions of things to suit me well. Flash and Bones was a very quick (a few hours) read, and, as usual, reaching her suspenseful chapter endings sent me directly to the next. Unlike the Temperance Brennan in the television series, the older Tempe in the books is no slouch when it comes to pop culture references. Although she doesn't know much about NASCAR, which plays a rather large part in this book, other characters in-the-know explain it succinctly to her. Not being a NASCAR follower myself I appreciated the abbreviated explanations (education) greatly. She references music, books, movies, and technology by name, which alludes to her awareness of a world outside of her work. I very much enjoy Temperance's internal (often snide) comebacks and the way she works through questions and case evidence to put the pieces into place. There are some light moments introduced into the story by Tempe's soon-to-be ex-husband's new fiance. Andrew Ryan and Tempe have only minimal contact via phone and email in this book. However, a rather hunky ex-cop seems to have revved Tempe's engine and caused her heart to go flip-flop. Wonder what's going to happen there. I can't wait to find out!