Book Review: Mai Tai One On by Jill Marie Landis 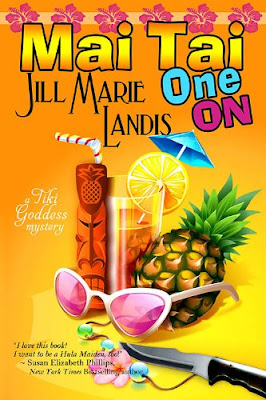 "Six months ago, if anyone would have told Em Johnson she'd end up divorced, broke, and running the dilapidated Tiki Goddess Bar on the magical North Shore of Kauai she would have told them to shove a swizzle stick up their okole.As if all that isn't bad enough, when an obnoxious neighbor with a grudge is found dead in the Goddess luau pit, suspicion falls on Em and the rest of the Goddess staff. With the help of a quirky dance troupe of over-the-hill Hula Maidens, Em and the cast of characters must ban together to find the killer and solve the mystery before the next pupu party. JILL MARIE LANDIS has written over twenty-five novels, which have earned awards and slots on such national bestseller lists as the USA TODAY Top 50 and the New York Times Best Sellers Plus. She is a seven-time finalist for Romance Writers of America's RITA Award in both Single Title and Contemporary Romance as well as a Golden Heart and RITA Award winner. She's written historical and contemporary romance as well as inspirational historical romance, and she is now penning The Tiki Goddess Mystery Series, which begins with MAI TAI ONE ON."

I believe I was looking for a comical mystery in the league of the Stephanie Plum books. Although I feel it is not the same caliber of fun the Plum series is, it was good enough for me to finish. There were a few lines of dialogue that were cleverly "cute" and some of the characters were fairly genuine. Many were too over-the-top eccentric for my tastes, but others were likable enough. The mystery was on the light side, and an obviously unpleasant character turned out to be the murderer. So, not much of a whodunit. The Island culture and language felt like a friendly character making appearances throughout the book. All in all it was a cute bit of fluff and not a total bust.

Posted by Virginia Hill at 5:54 PM