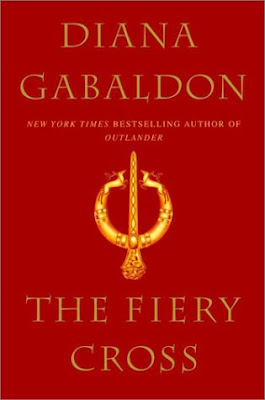 The year is 1771, and war is coming. Jamie Fraser’s wife tells him so. Little as he wishes to, he must believe it, for hers is a gift of dreadful prophecy—a time-traveler’ s certain knowledge. Claire’s unique view of the future has brought him both danger and deliverance in the past; her knowledge of the oncoming revolution is a flickering torch that may light his way through the perilous years ahead—or ignite a conflagration that will leave their lives in ashes.

Let me just start by saying I loved the first four books in the Outlander Series—like everyone else! I read them in the '90s and again last year. I tried reading The Fiery Cross several times when it was released but just couldn't get past the first few chapters. Was it all the breastfeeding and "clout" talk? I am fairly certain that was it.

It took me over 6 months to read, but I did it! At some point I found myself looking forward to picking it up again. I'm sure that my interest was in direct correlation to Jamie and Claire being featured more prominently later in the story. I had reached the point where I had to find out what happened next.

I have A Breath of Snow and Ashes and An Echo in the Bone waiting for me. I look forward to reading them after a short breather—The Fiery Cross was a heavy read at 1456 pages!

Posted by Virginia Hill at 4:13 PM