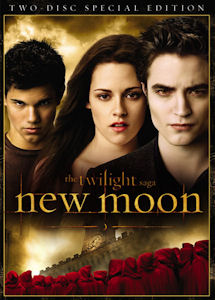 My wait for New Moon only began last March when I first saw Twilight on DVD in the comfort (and quiet) of my own home. Of course, that set off a case of "Twi-Mania" first shared in My "Twilight" Zone.

I knew I would allow myself a trip to the theater to see the next installment in The Twilight Saga.  As previously mentioned, I really only made a point of seeing the latest Harry Potter movie at the cinema. While in my 20s and 30s I went to the movies frequently. For several years I had a theater in the same shopping center where I worked. That made seeing movies there a no-brainer. I just now chuckled over the fact that it was the "Twilight" showing that I attended most Sundays. It was just $2.95 to see any new release. What a bargain!

I had planned on taking only my daughter (who is wise beyond her years and understands that Bella's devotion to Edward is NOT healthy) with me. You know, a true "girls night," but I asked my husband several days ago.  I don't think any definite commitment was made at the time. He asked me, a couple of times, I think, if I really wanted him to come. I did, I just told him not to tease me about being excited (okay, overly excited). He goes to the theater several times per year with his brother. I had a feeling our neighborhood theater was going to be much busier than he was used to. We picked our daughter up from school and drove straight to the theater. We arrived there 45 minutes before the ticket booth was to open, so we walked down to a restaurant to get a drink and wait for a few minutes. I was 2/3 the way through my lemonade when I decided to look outside for the beginnings of a line at the theater. There was about a half-dozen young girls waiting.(Those "placeholders" eventually added about a dozen of their BFFs to the line.)

While waiting in line, my husband mentioned something about going home and that he could call someone to come pick him up (good, 'cuz I wasn't leaving). Of course, he ended up staying. Although, I feel that he probably does wish he had avoided the entire "ordeal."

I purchased our matinée tickets and joined my husband in the lobby, where he had gotten a drink and popcorn. With my memento worthy New Moon ticket stub in my hot Twilight Mom hand we entered the small theater screening room. I wanted to sit in the rear, and my thoughtful husband obliged me. We were seated in the first full row in the back left. He then went and got our daughter and me some popcorn. I was NOT hungry. I had a case of Twilight-Excitement that goes beyond a hunger for food. *winks*

This is my take (with much missing due to my poor recall) of the evening...

The theater was really filled. I watched in near terror as women brought wee ones into the theater on their hips. (I remember what it is like not to have someone to watch her child, but I merely stayed home when my daughter was a babe). An occasional male made his appearance amidst the horde of females. Lots of cell phone action going on—I did a couple of Facebook and Twitter updates myself. Hey, we want to share our exhilaration with others!  However, my phone was put on "Silent" and tucked away before the movie started, whereas many others decided to "light up" during the movie. Ack!  Let me just get my crowd gripes out of the way before I describe my thoughts on the movie itself. Lots of door opening and closing. Many times staying open for several long seconds. People entering the movie late.  Lots of talking and teasing and people saying "shut up." Chair bumping and, yes, even babies crying. Several times I squeezed my daughter's knee or patted her leg. I even hugged her a time or two. I was going to enjoy my New Moon experience no matter what!  So, I leaned forward and ...

General impressions with some possible ***spoilers***.

There were only two previews before the gigantic moon showed on the screen. Then slowly n-o-o-M w-e-N is revealed. Ooooh! None of the usual long and drawn out opening credits.  Let's get straight to the movie, folks.

Yes, it is very different from Twilight, but we all knew it would be. The vampires look different. Their eyes (contacts) were the most visible change. Hair and attire were different. I was fine with those changes.

Edward. Ah, Edward. I think that he looked more like Rob (doesn't everyone including Rob?) Not so much about the hair in this one. Yay!

Now, this is a biggy for me. The script was fleshed out more. Not so much of the incoherent teen mumblings. Jessica can actually speak! The other school buds had only seconds of screen time. "Book Bella" is Stephenie Meyer's storytelling. "Movie Bella" does some narration, but her movie dialogue still needs some work. There were some good (and even humorous) lines delivered well. I got the chills when Edward delivered lines from Romeo and Juliet in class. Good job, Rob!

There are differences between the movie and book, of course. I thought the October to November to December to January passing during Bella's blackest period transitioned well to screen. It's not like we haven't witnessed similar instances of time passing in other movies (Notting Hill comes to mind), but I thought it was effective in showing her despair. Maybe not as much as Stephenie did in the book but still...props to Melissa Rosenberg.

Considering the advancement in CGI technology I expected a little more smoothness and grace in the wolves but still an amazing job. The wolf pack is awesome. The boys "did good."  Jacob is what Bella needed, but he keeps breaking his promise. Poor kid. Taylor Lautner (Jacob) is a scene stealer. Billy Burke (Charlie Swan) is, too.

The addition of the action scenes with the Volturi were a great visual addition. Well done! I did cringe when Felix slammed Edward to the floor. How dare he! Not MY Edward!

The Carter Burwell score in Twilight was much more of a presence than the score in New Moon.  For some reason, I felt the New Moon score by Alexandre Desplat played like muzak.  His piece, New Moon (The Meadow), is a particularly lovely piece, though. The soundtrack and score is a really important (and lucrative) part of the Twilight Saga. Stephenie is a genius at selecting music that inspires her stories. I still want the New Moon Score. I can't help it!

I also felt that New Moon seemed somewhat disjointed. Something about the editing that didn't quite hit the spot. The scenes didn't flow seamlessly like they mostly did in Twilight.  Still, the visual aspect of New Moon is stunning! Twi-Hards will love it. Twi-Haters will snub it and worse. The Twi-Indifferents may wait until it's on television and then wonder, "What's the big deal?"

The ending, well, I thought it was abrupt (several excellent quotes gone...pfffft!). However, if Eclipse truly begins where New Moon ended, I may be able to adjust my thinking on that.

I see it for what it is to me—something that I allow myself to be totally immersed in and enjoy.

I hope to see it once more in the theater (UPDATE: I did on 11/29!) Oh, but how I anticipate watching the DVD next March on our huge plasma with surround sound and sub-titles....*chills* Then, for a more personal viewing experience I'll want to watch it on my iPod—over and over and over...

Posted by Virginia Hill at 8:14 AM