Book Review: By a Thread by Lucy Score 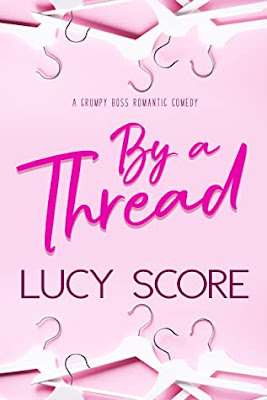 Title: By a Thread

I got her fired. Okay, so I’d had a bad day and took it out on a bystander in a pizza shop. But there’s nothing innocent about Ally Morales. She proves that her first day of her new job… in my office… after being hired by my mother.

So maybe her colorful, annoying, inexplicably alluring personality brightens up the magazine’s offices that have felt like a prison for the past year. Maybe I like that she argues with me in front of the editorial staff. And maybe my after-hours fantasies are haunted by those brown eyes and that sharp tongue.

But that doesn’t mean that I’m going to be the next Russo man to take advantage of his position. I might be a second-generation asshole, but I am not my father.

She’s working herself to death at half a dozen dead-end jobs for some secret reason she doesn’t feel like sharing with me. And I’m going to fix it all. Don’t accuse me of caring. She’s nothing more than a puzzle to be solved. If I can get her to quit, I can finally peel away all those layers. Then I can go back to salvaging the family name and forget all about the dancing, beer-slinging brunette.

Author’s Note: A steamy, swoony workplace romantic comedy with a grumpy boss hero determined to save the day and a plucky heroine who is starting to wonder if there might actually be a beating heart just beneath her boss’s sexy vests.

I loved this book! The zingers, repartee, and chemistry between Ally and Dominic had me in stitches! By a Thread was by turns humorous, touching, sizzling, and had just enough conflict to keep me looking forward to their rewarding happily-ever-after. It delivered on every count! ❤️

“Dominic, for the love of God. Behave yourself,” the woman sighed in exasperation. In answer, he spun his pizza around so his mother could read it. FU spelled out in greasy pepperoni. “Is there a problem, sir?” I asked with sugary politeness. “Oh, my,” the woman said, pressing her fingers to her mouth and trying to stifle a laugh. A real one this time. “It’s not funny,” he snapped. “It is from where I stand,” I said. “You are a server. Your job is to act like one and serve,” he said. Ass. And. Hole. “You’re a human. Your job is to act like one,” I countered.

I brought my son on to take his father’s place and tasked him—perhaps unfairly—with cleaning up his father’s mess. As you saw last week, the strain is getting to him.” I was busy wondering exactly what Dalessandra wasn’t saying when that last bit of information landed. Oh, shit. “Charming is your son?” She looked bewildered. “Who did you think he was?” “I thought he was your date. I told him you could do better than him,” I said.

“I don’t hate you, Ally.” His voice was quiet, gruff. I wasn’t sure how it had happened, but suddenly we were standing too close. Nothing good would come of this odd attraction. Yet I couldn’t seem to help myself. He was supposed to be cold. However, from where I stood, inches away, he seemed anything but. “Good. Because frankly, I’m irresistible, and you might as well just give up the fight now.” “I can’t afford to find you irresistible,” he said. We weren’t touching. But it felt like the space between us was charged with something. It was acting like a defibrillator on my heart. I didn’t like him, I reminded myself. But clearly that didn’t mean I didn’t want him. Apparently I’d turned into a woman who would gladly rip her clothes off and jump a guy who didn’t like her just because he was scary hot.

I really needed to stop consuming dairy products. This had to be some kind of hormonal effect from too much glorious cheese.

I got it now. I got him now. He wanted me but not enough to do something that—in his mind—would put him in his father’s league. I had experience in that department and could respect Dominic’s decision. I wanted that revelation to free me from whatever attraction I had to the man. I wanted to feel relieved. Instead, I just felt sad. Bone-deep, soul-deep sad.

“There are a lot of things I want,” he said softly. His hopeful gaze found mine and held it. His pinky flexed, and for one glorious, perfect second, it brushed mine. My body lit up like a Christmas tree. I loved him. So damn much. And he’d hurt me so damn badly. And I didn’t know what I needed from him.

Posted by Virginia Hill at 1:30 PM