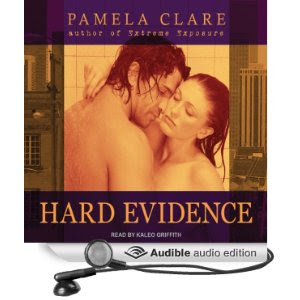 After the murder of a teenage girl, a mysterious man in a black leather jacket was seen lurking near the crime scene. Investigative reporter Tessa Novak has him in her sights as the culprit.

That man was Julian Darcangelo, an undercover FBI agent working with the Denver police. He's closing in on the trail of a human trafficker and killer. Tessa's accusations could blow his cover, and he wants her off the investigation.

But just as Tessa has made Julian a target of interest, she is now a target of the killer. And as they are forced to trust each other, their physical attraction escalates as intensely as the threat from a ruthless murderer who wants to see both of them dead...

Prior to Hard Evidence, the only other audiobook I had listened to in its entirety was way back in 1988, mainly because I process the written word better than I do the spoken word. I read the I-Team books last year, and have closely followed the publishing progress of the audio versions. After listening to samples of the talented Kaleo Griffith I decided upon the second book in the series mainly because I was most interested in how he voiced Julian Darcangelo. I was extremely pleased with his interpretation of Julian and the rest of the characters. If I were to be critical, my least favorite "voice" would be that of Tessa. The Southern U.S. dialect is a tricky one for me to find listenable. Kaleo's delivery did not irritate me at all, but I didn't look forward to hearing Tessa the way I did the other characters. I read the Kindle version in June 2012, and as with all of Pamela Clare's current works, I appreciated nearly every aspect of it. After listening to samples of some of my favorite "reads" I didn't find another narrator who I wanted to start out with more than Mr. Griffith. His narrative voice is so clear, rich, and resonant—his cadence perfect. I've read some reviews in which listeners felt the need to increase the speed of the audiobook; that was not an issue with this book at all. I thought Kaleo handled the stammers, pauses, and character changes beautifully! Also, being that the I-Team books are steamy as well as suspenseful, I really appreciated his handling of the racier parts of the book. Oh yeah, very sensuously done! Overall, I was so pleased with this first real audiobook experience that I have already bought books 1,3, and 4. I'm sure I'll have 5 and 5.5 before too much longer. I think I'll always prefer reading, but with proven reads being narrated by such talented artists as Kaleo Griffith, I think it's safe to say that I shall end up selectively enthusiastic over audiobooks as well.

Posted by Virginia Hill at 2:52 PM