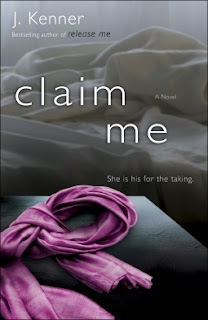 For Damien, our obsession is a game. For me, it is fiercely, blindingly, real.

Damien Stark’s need is palpable—his need for pleasure, his need for control, his need for me. Beautiful and brilliant yet tortured at his core, he is in every way my match.

I have agreed to be his alone, and now I want him to be fully mine. I want us to possess each other beyond the sweetest edge of our ecstasy, into the deepest desires of our souls. To let the fire that burns between us consume us both.

But there are dark places within Damien that not even our wildest passion can touch. I yearn to know his secrets, yearn for him to surrender to me as I have surrendered to him. But our troubled pasts will either bind us close . . . or shatter us completely.

It is said that good things come to those who wait. When you're a reader waiting for THE next book in a series the wait can feel interminable. When that next book is not only good but exceeds all those anticipatory feelings you've held onto FOREVER...it's BLISSFUL! Such is the case with the second book in the Stark Trilogy by J. Kenner. I devoured Release Me in January and—at that time—thought I would have to wait until July to read Claim Me. Then...relief. The release date was moved up to April 23. Hallelujah! But, still, FOUR MONTHS?! I had to wait FOUR WHOLE MONTHS! It.Was.So.Worth.It! ::::::squee::::::


"I think I understand what Damien needs. Not the pain but the control. He needs to claim me."

I don't read full reviews until after I've read and said what I have to say about a book. However, I had noticed a couple of comments by some readers of Advance Reader Copies saying not much happened in the first half or so of Claim Me. Let me just say this about that—I did not feel that way at all! I re-read Release Me immediately before starting this book, so I was already feeling immersed in Damien and Nikki's story—almost like that four-month wait never existed...

Claim Me began just as the portrait of Nikki was being completed (in two weeks instead of the allotted one) and Nikki's agreement ("game") with Damien was due to end as well. Right from the start the sizzling connection that Julie Kenner created for Damien and Nikki was there...


"...And I don't need to see him to know that the tension in his tone isn't tied to the thrill of chasing a business deal. It's about me, and that simple fact is as intoxicating as champagne on an empty stomach. An entire empire needing his attention, and yet in that moment, I am his whole world."

However sizzling their sexual chemistry was, their relationship was comprised of so much more...all that "more" was what makes this couple so dynamic and alluring!


"Do you have any idea how much you mean to me?"

"'There is nothing about you that I could ever forget,' he says. 'You are burned into my memory. Your hair glittering in the candlelight. Your skin, dewy and soft, as you step out of the shower. The way you move beneath me when we make love. And the way you look at me, as if there is nothing you could see inside me that would make you want to turn away.'"

"Just one more thing. When I said you could stay? What I meant to say was I love you."

And then there was the way he said good-bye to Nikki in text messages and an email...


"Until later, imagine me, touching you."

Okay, so if those lovely words weren't enough, they also rock when it comes to playful teasing and sexy talk...


Nikki: "'Should I alert the financial papers?' I'd teased. 'Doesn't it affect the market when Damien Stark takes a day off work?'"

Damien: "'I'm willing to risk global economic collapse if it means a few hours with you.' He drew my hand up and kissed the tip of each finger. 'Of course, the more shopping we do, the more we support the economy.' His voice was low and sultry and full of enticing promises. 'Or maybe we should go back to the apartment. I can think of several interesting ways to spend the afternoon that have no fiscal impact whatsoever.'"

Nikki: "'Tempting.' I'd retorted. 'But I don't think that I could stand the guilt knowing that I traded an orgasm for fiscal ruin.'"

Damien: "Trust me, baby. It would be more than one orgasm."

Believe me, there are plenty more playful and clever exchanges where that came from, 'cause this book is full of them. GOODY! Honestly, I got a whole Nick and Nora Charles (The Thin Man movies) vibe during these flirtatious interchanges. Updated and more risqué, but definitely a modern-day twist on the classic couple. (No disrespect to the Charles' intended because not only do I adore them; so do Damien and Nikki!)

Then, after Damien treated Nikki to some delectable desserts—using his hands to feed her and do some other yummy things, he said:


"'So tell me, Nikki, his voice soft and seductive. 'Did you enjoy your dessert?'"  - Holy moly, what a sexy double entendre that was!

However, along with all the clever conversations, playful teasing, and hot sex, there was also unpleasantness: loss of privacy, job-related problems, legal issues, pernicious parents, strained friendships, and devastating emotional turmoil.

Several disturbing events caused Nikki to feel overwhelmingly distressed. They left her in need of the "soothing" and "centering" she used to find in a self-destructive act. An act that she feels Damien may have replaced, which concerns her immensely. Her struggle during those dark times was painfully apparent and very sad. She showed strength though, which had me offering her "attagirls!"

Most of the OH NO! moments happened toward the end, thank goodness because I was a wreck! It was late, I was tired, and I was worried about Damien and Nikki. Even with all of those things freaking me out I thought the end wasn't completely devastating and the cliffhanger ending wasn't too abrupt. Whew!

The final book in the trilogy, Complete Me

, is expected July 30. Only a three month wait this time. *sighs*


Damien: "I find that it's a social faux pas to host a party with a permanent hard-on."

Nikki: "Well, then, perhaps you should have planned to hang the painting in the bedroom."

Damien: "I don't need the image in my bedroom. Not when I have the real thing."

Nikki: "'And you do,' I say, my tone teasing. 'Bought and paid for. At least until midnight when I turn into a pumpkin.'"

Damien: "...I attribute much of my success to my ability to extract as much value as possible from every monetary transaction."

Nikki: "I lick my lips. 'And I'm a monetary transaction?'"

Damien: "You are indeed."

Nikki: "I see. And how do you intend to extract value?"

Nikki: "you said you were going to make me come."

Nikki: "What are you doing?"

Jamie: "Checking for fever. Are you ill? I thought that all Damien had to do was crook his finger and you'd come."

Nikki: "'I told him we were hanging out tonight,' I say. And then, because I just can't resist, I add, 'And for the record, you're right. He crooks his finger, and I most definitely come.'"

I have most certainly been "Damienized" but am still smitten with Christian, Gideon, Ethan, and Gabriel! :)