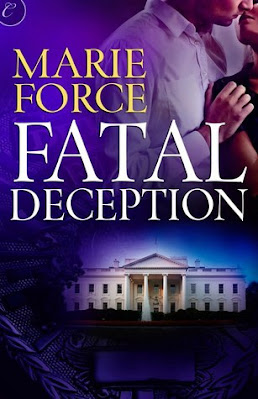 The wife of the White House deputy chief of staff has been beaten to death, and their one-year-old daughter is missing. D.C. Police Lieutenant Sam Holland is in charge of the murder investigation, but she's forced to collaborate with Special Victims Unit detectives as well as thorn-in-her-side FBI Special Agent Avery Hill. Then, a cold case of her father's resurrects old hurts—a distraction Sam cannot afford.

As Sam's investigation heats up, so does Nick's political career—and the heat carries over to their bedroom. Will Sam put the pieces together in time to catch a killer and find the baby, or will ambition, greed and lies prove fatal?

In preparation for the release of this fifth novel in The Fatal Series, I re-read the other four (plus the novella) last week. The two books I had previously rated four stars were upped to five, and if it were possible I would rate Fatal Deception even higher! While reading it I chuckled, laughed, and even snorted a few times. The banter between Sam and her detectives was beyond clever. And then there was the chemistry between Sam and Nick. I would go so far as to say they are one of my absolute favorite literary couples. I felt a sense of awe from the first page to last for the story as a whole, and for the details. They all added up to one remarkable read! My admiration for the characters certainly doesn't end with Sam and Nick. The supporting characters are all so incredibly vivid to me, as well. I was captivated by every aspect of the investigation, and especially by the taking down of the powerful family who considered themselves above the law. The epilogue was not of the happily ever after variety, as this is a continuing series, but it sure was extremely gratifying!


"How was she supposed to ponder a potential pregnancy when she couldn't even talk about it without bawling her head off? 'But I think about our baby every day. I think about them all, but that one...' 'I know.' He tightened his hold on her, with one hand on the back of her head to keep her snuggled into his chest. 'You don't have to decide anything until you're ready.'
'Well, we have to decide something or practice abstinence until we do.'
'I do not know this word of which you speak.'"
~ An exchange between Sam and Nick

"Happy to oblige, even if the cross-pollination of my world and Nick's world continues to give me hives."

(Note: Truthfully, I didn't highlight anything and only made two notes in my Kindle copy. Believe me, it's not because nothing deserved to be highlighted, it's because too much did. I'm serious. The entire series is first class writing all the way.)

Posted by Virginia Hill at 2:12 PM