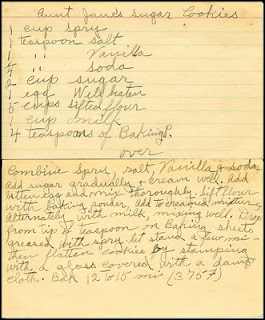 This recipe was handwritten by my great aunt, Hazel (HILL) BECK, and was one of many in this recipe box her daughter gave to me. Now, I'm not sure if "Aunt Jane" was a friend's Aunt Jane, or a company called Aunt Jane, or if it was Hazel's great aunt, Jane Lois (HILL)(STORY) ROBB, who died in 1917. The mascot for Spry Shortening was a character called "Aunt Jenny" (portrayed by Edith Spencer.) It could be that my Aunt Hazel wrote Aunt Jane instead of Aunt Jenny.  Who knows?  What I DO know is MY great aunt wrote this recipe, probably made it, and it's at least 60 years old. I transcribed it as written. Comments I added are in brackets.