Music and reading have been competing for my leisure time in a big way these last three months. I've read sixty books and have, for much of that time, been concurrently listening to music. Since my last new music entry I've acquired 79 new songs and still have quite a long wish list (like the albums featuring several of the singles below). How is it that I keep finding music I "can't live without" at my age? I seem to be "enlightened" a great deal by music featured in television and movies, and recently, also by a trilogy of books.  The iTunes Genius recommendations have introduced me to several artists I count among my favorites. The music recommendation/sharing sites Pandora, LastFM, and Spotify have also steered me towards some choice music.  Although I have in one way or another avoided several music genres I recently purchased my first classical, opera (world), and salsa numbers. No one could be as surprised as I am, but I'm enjoying them quite a bit. I'll be interested in the recommendations I receive as Genius continues to update.

I happened to be paying attention to my LastFm play count and on May 1 Foreigner's "Feels Like the First Time" took my counter to 20,000!!! If my iPod had "scrobbled" every time I synced and my BlackBerry play count could be attributed to my total it would be monumentally higher. Probably closer to 20 tracks per day instead of 14. Basically it translates to music being in my head a lot!

Thanks to my husband for the Valentine's Day iTunes Gift Card. He knows what I want!!! 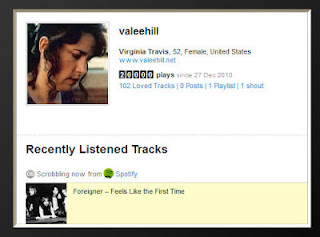 The artist names are linked to their Wikipedia pages. Song links are to YouTube videos.

Coldplay
Paradise
Every Teardrop Is a Waterfall
Princess of China

The Decemberists
One Engine (from The Hunger Games Soundtrack)

Jeff Buckley
Lover, You Should Have Come Over (I am over-the-top for this song and look forward to buying more of Jeff's music. He, who died, tragically in 1997, at age 30.)

She Wants Revenge
Up in Flames

Alex Clare
Too Close (featured in the IE9 television commercial and a current FAVORITE of mine!)

Britney Spears
Toxic (my first and probably only Britney song)

Gabriella Cilmi
Sweet About Me

KT Tunstall
Come On, Get In

Bonnie Raitt
Right Down the Line (an iTunes free download)

Georgia Satellites
Keep Your Hands to Yourself

Pink Floyd
The Great Gig in the Sky

The Police
Every Breath You Take
King of Pain

The Civil Wars
Barton Hollow* (already had the single)

What say you?  What are you listening to these days?